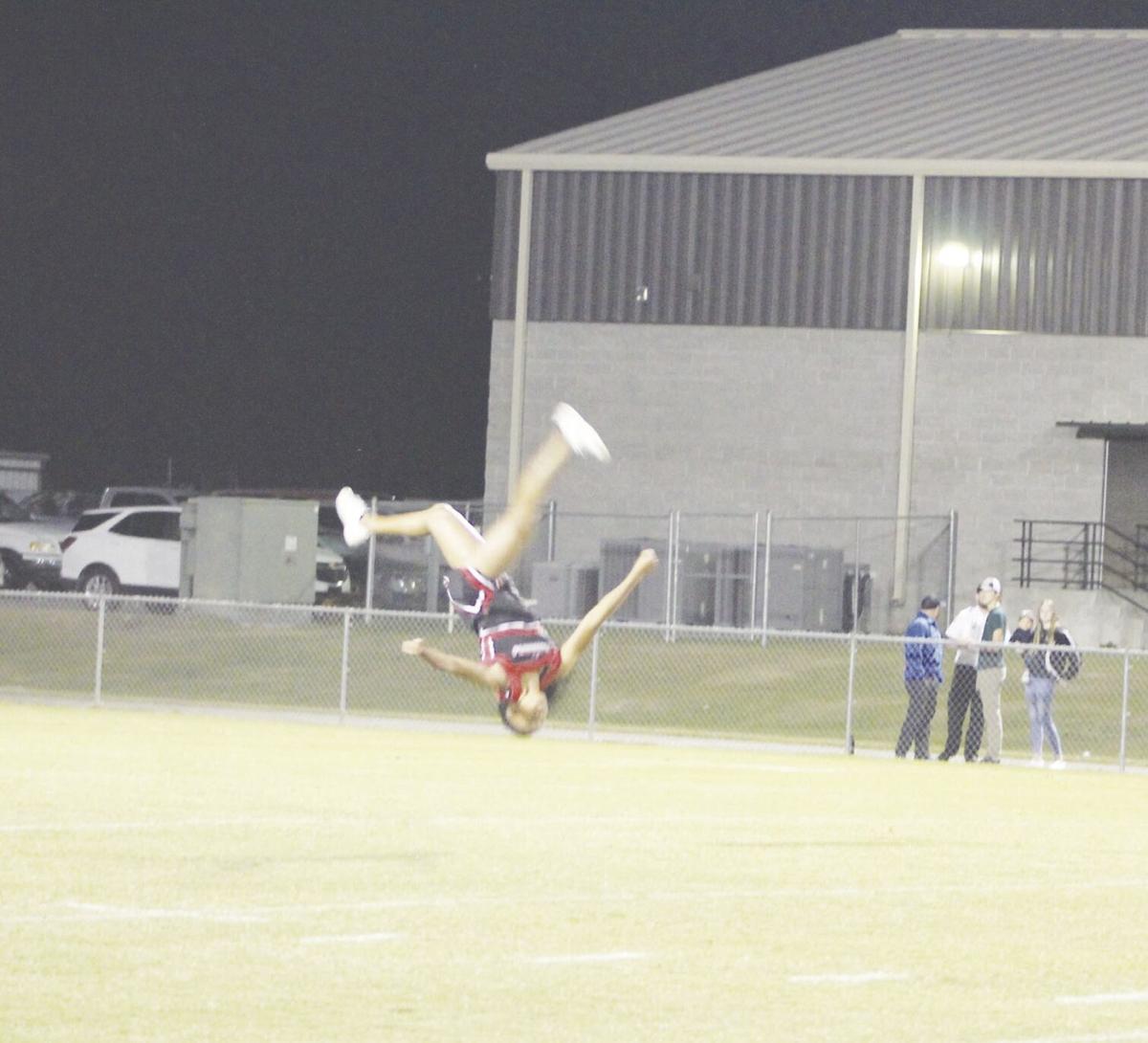 THE CHARLTON COUNTY INDIANS CHEERLEADERS KICK IT UP A NOTCH DURING HALF TIME. 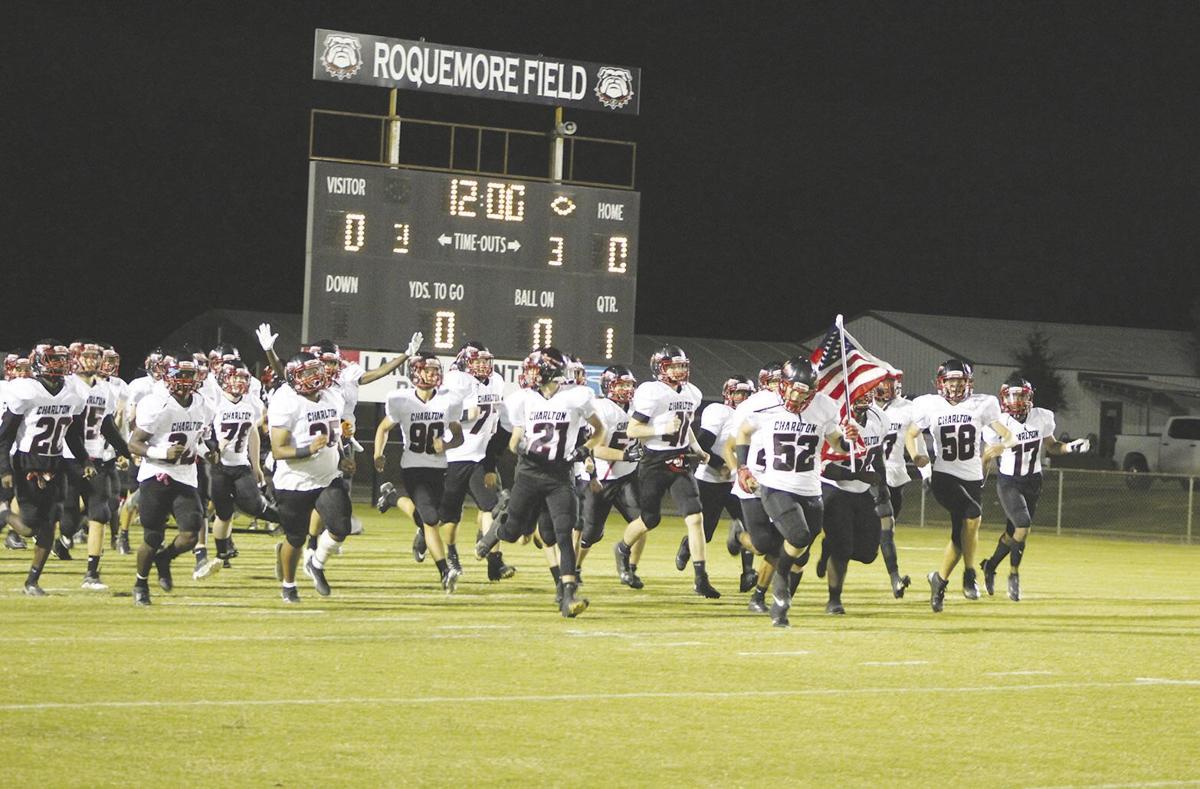 INDIANS RUN ONTO THE FIELD AT THE START OF THE GAME. 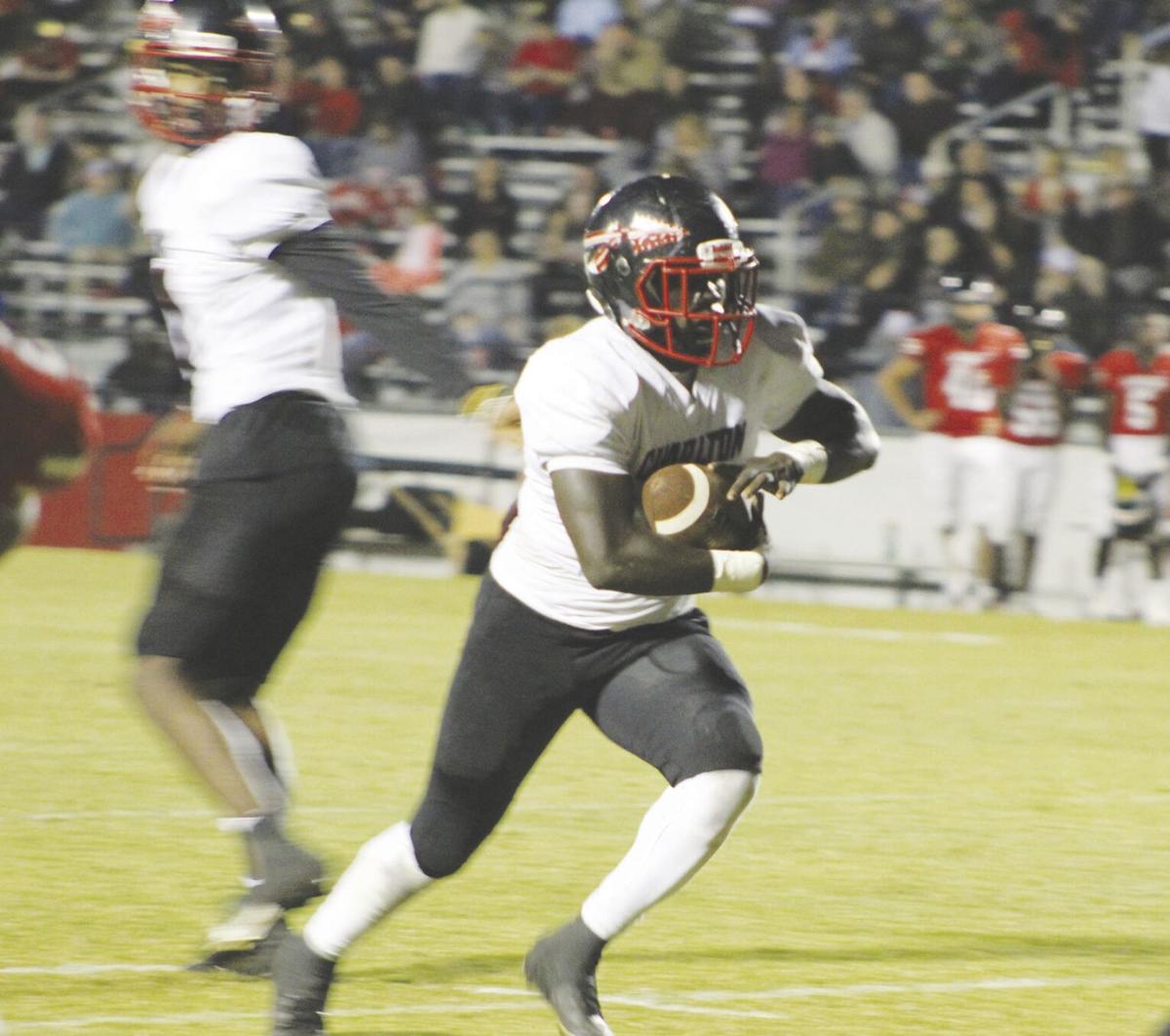 RUNNING FOR THE GOAL! INDIANS HAVE THE BALL. 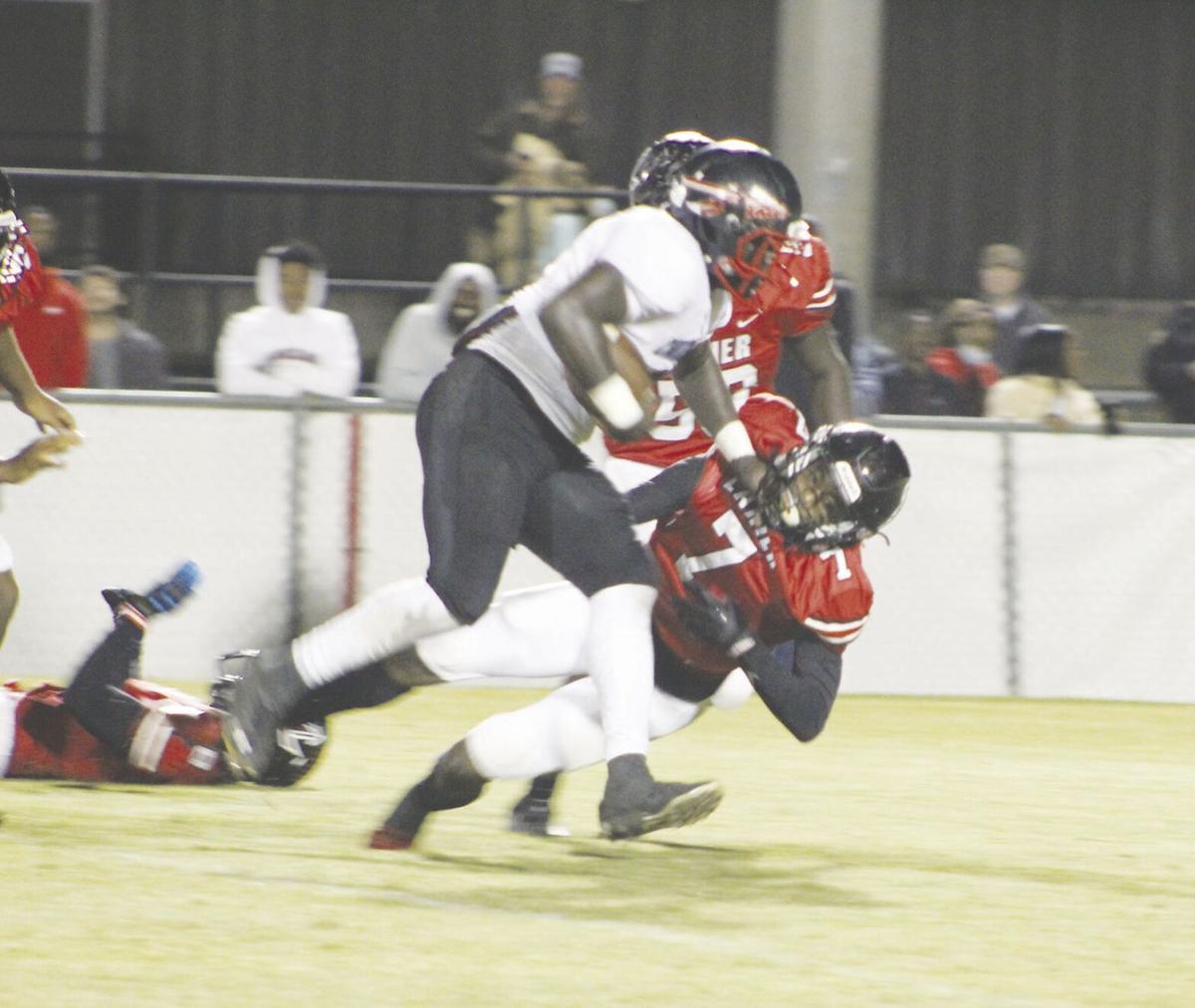 PLAYERS ON BOTH TEAMS BRACE FOR A TACKLE. 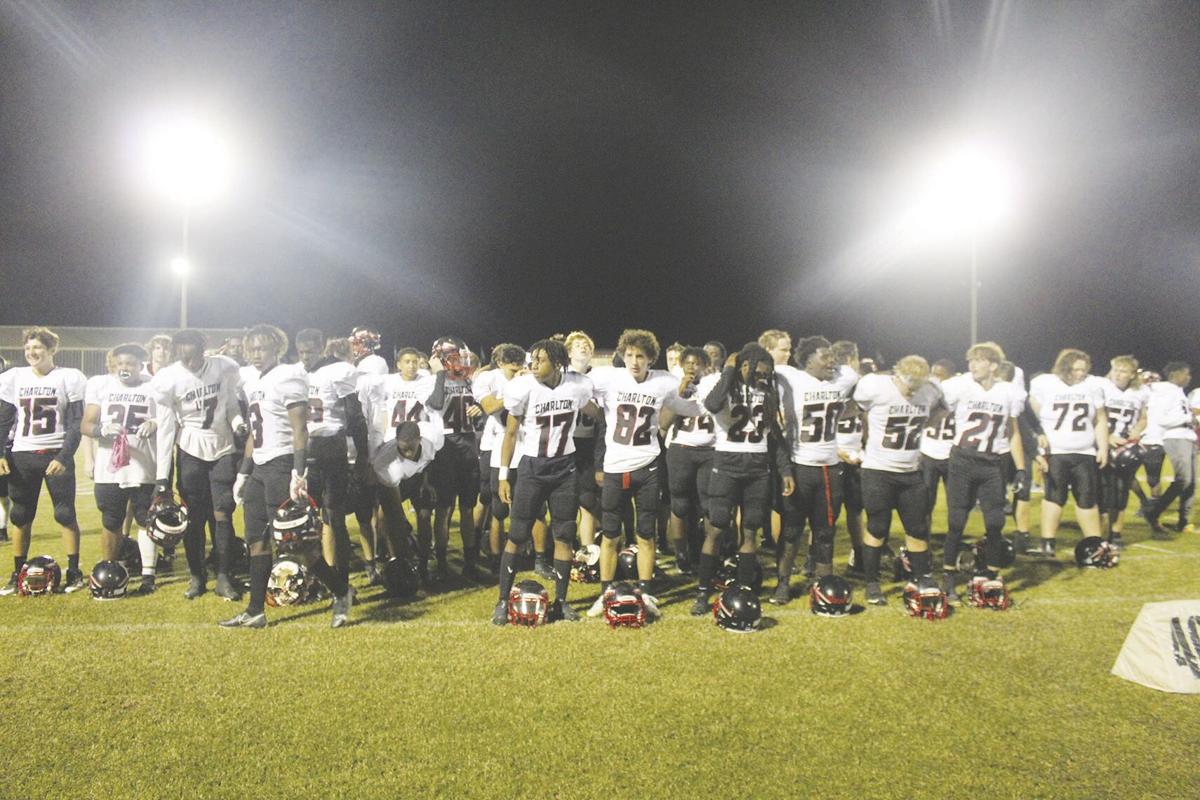 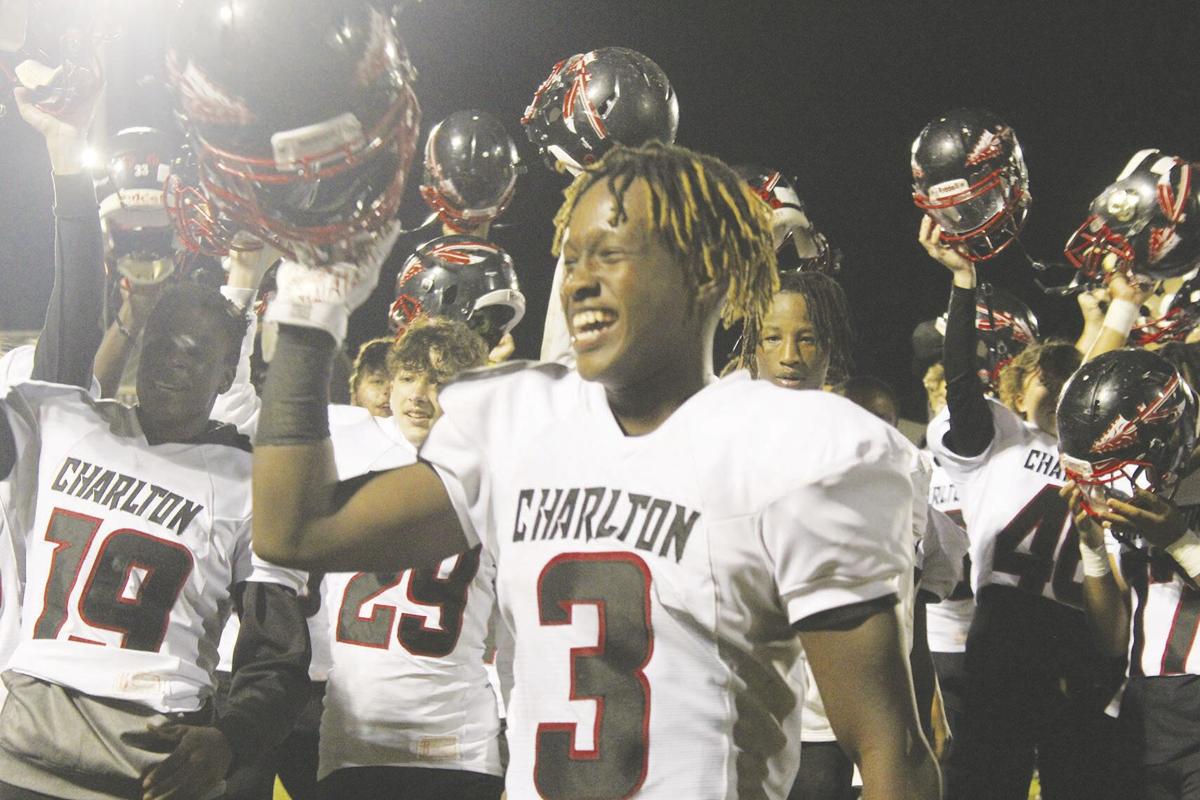 THE CHARLTON COUNTY INDIANS CHEERLEADERS KICK IT UP A NOTCH DURING HALF TIME.

INDIANS RUN ONTO THE FIELD AT THE START OF THE GAME.

RUNNING FOR THE GOAL! INDIANS HAVE THE BALL.

PLAYERS ON BOTH TEAMS BRACE FOR A TACKLE.

The Charlton County football team remained in contention for the fourth and final playoff spot from Region 2-A after hanging on and defeating Lanier County 42-41 last Friday night in Lakeland. The Indians turned back a two point conversion in the final seconds to pull off the win.

A win this Friday night against Atkinson County would clinch the playoff berth, while a loss would throw them into a three way tie setting up maybe a mini-playoff to determine the final position.

The Tribe got 219 yards rushing and four touchdowns from Jaylen Lilley to lead the way as he went over the 1,000 yard mark on the season. He currently has 1,195 yards going into the regular season finale.

The game started innocently enough with no score after the opening quarter. But the Bulldogs started the second quarter with a short scoring drive of 32 yards culminating with a six yard touchdown pass with 8:25 left in the half. The PAT made it 7-0.

The Indians would get a good kickoff return by Kyler Williams out to the 33. A seven yard pass from Jaylen King to Emari Williams was followed by a 13 yard King run. Lilley ran three times for 19 yards before a pass interference penalty gave the Tribe a first down at the 13 yard line. King picked up two yards on a pair of carries before hitting Lilley on a swing pass out of the backfield for an 11 yard touchdown pass. However, the PAT kick failed and with 3:43 remaining in the half the Bulldogs still led 7-6.

But the Bulldogs would fumble the ensuing kickoff and Nathan Hamlette fell on the loose ball for Charlton at the 28 yard line. A penalty would drive the Indians back to the 35, and on fourth down King would find Kyler Williams down the sideline for a scoring pass. Wyatt Crews kicked the PAT and the Indians led 13-7 with 1:55 left.

An unsportsmanlike conduct penalty on the Indians after the score forced them to kickoff from the 25 and Lanier got good field position at the Indian 40 yard line. A short, quick passing game along with another Indian penalty moved the Bulldogs down to the ten. But the defense would stiffen and force Lanier to a 27 yard field goal that was blocked by Dairius Jones as time expired with the Tribe clinging to a 13-7 lead.

Lanier would start the second half with the ball and got a long pass down deep into Indian territory. But three plays later, King would come up with an interception at the two yard line.

Lilley ran four times for 36 yards and King added a seven yard scamper out to the 45. King would then find Najee Smith open downfield for a 49 yard gain down to the seven. Lilley ran once for a yard and on second down covered the final six yards for a touchdown. Crews PAT was good and the Indian lead was 21-7.

Lanier would return the ball out to the 45. After a short one yard pass they would connect deep on the next play for a 54 yard touchdown pass to close the gap to 21-14.

The teams would trade turnovers with Jay Harris picking off a Bulldog pass giving the Tribe the ball at the Lanier 41. King ran for seven before Lilley took a hand off and dashed 34 yards to paydirt with 2:51 left in third quarter. Crews PAT gave the Tribe a 14 point lead.

On Lanier's next possession, Xavier Swift intercepted a pass at the Indian 44. King ran for nine yards before Lilley added five more. On the next play Lilley would break free again scoring from 41 yards out with 44 seconds left in the half. Crews PAT pushed the lead to 35-14 and the Indians seemed to be in good shape.

But on the final play of the third quarter the Bulldogs struck deep again on a 68 yard touchdown pass and the lead was down to 35-21.

Kicking off to start the fourth quarter the Bulldogs attempted an onside kick. With the ball taking a high hop, Dalton Brantley jumped up and grabbed the ball and then raced 48 yards for a touchdown. Crews' PAT pushed the lead back to 21 points.

Lanier tried another onside kick and this time recovered the loose football at the Indian 40 yard line. A six play drive, aided by a pass interference and an offside penalty ended with Lanier scoring on a two yard run and with the PAT the Indian lead was suddenly down to seven with 5:57 remaining.

With the Tribe pulled up close expecting another onside kick, the Bulldogs kicked deep and the Tribe ended up with the ball at their own eight yard line. Hoping to pick up some first downs to run out the clock, the Indians were able to advance out to the 36, but had to punt the ball away with 2:25 remaining.

Lanier started from their own 40 and three passes later had moved to the 24. Two runs moved it to the ten, where the Bulldogs had first and goal with the clock winding down. A seven yard run was followed by a three yard touchdown and the Bulldogs were within a point with 0:21 seconds left. After timeouts from both side,s the Bulldogs lined up to win the game with a two point conversion. A quick slant pass was knocked away, but the officials called pass interference giving Lanier another chance from a yard and a half away. Lanier's quarterback would attempt a sneak, but the Indian defense rose up and stopped him just short of the goal line to maintain their 42-41 lead.

Lanier would attempt the onside kick again with the ball going out of bounds. Charlton trotted out the offense to finish the game, but the officials declared Lanier was offside and the ball had to be re-kicked. The Bulldogs tried again and the ball went out of bounds again. Finally the Indians were able to line up and take a knee to run out the clock.

In addition to Lilley's big game, King passed for 105 yards while adding 65 more on the ground to help the Tribe pick up 388 total yards of offense. Defensively, Hamlette was in on ten tackles along with a fumble recovery, while Lilley was in on eight stops followed by Jamie Jackson and Swift with seven each.