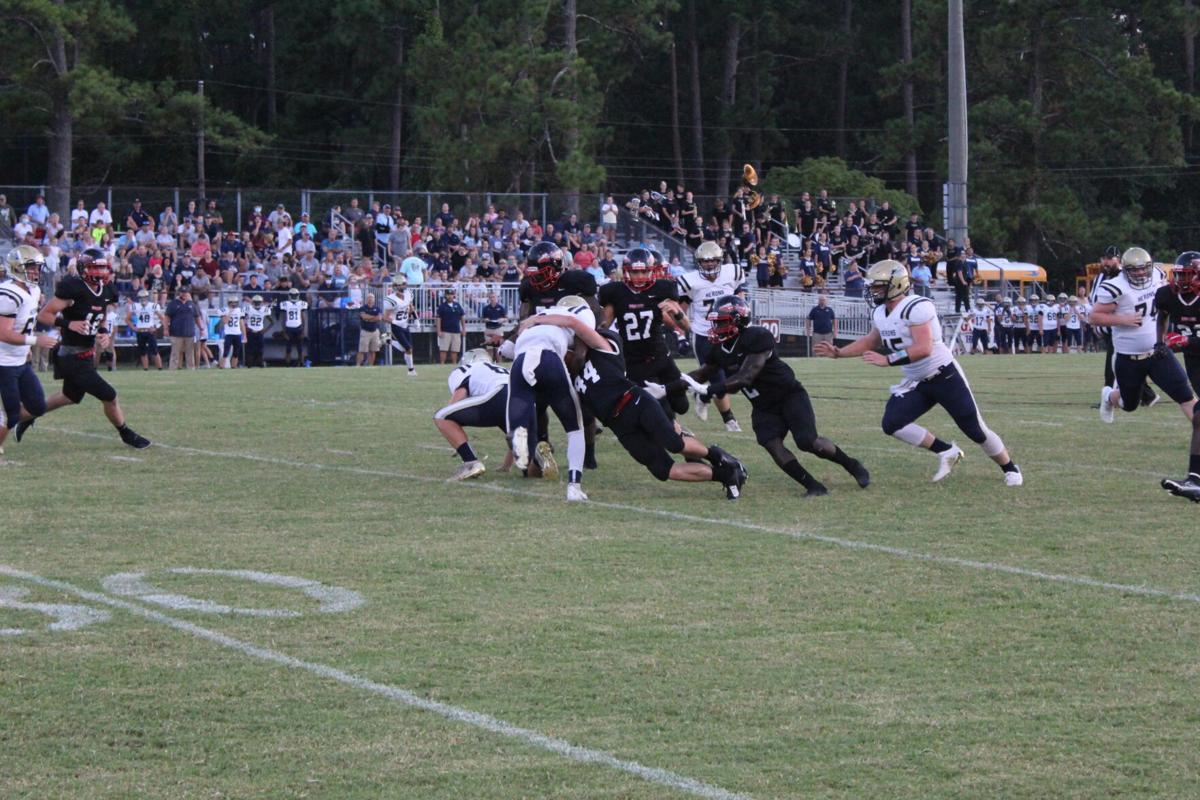 The Indians work on offense. 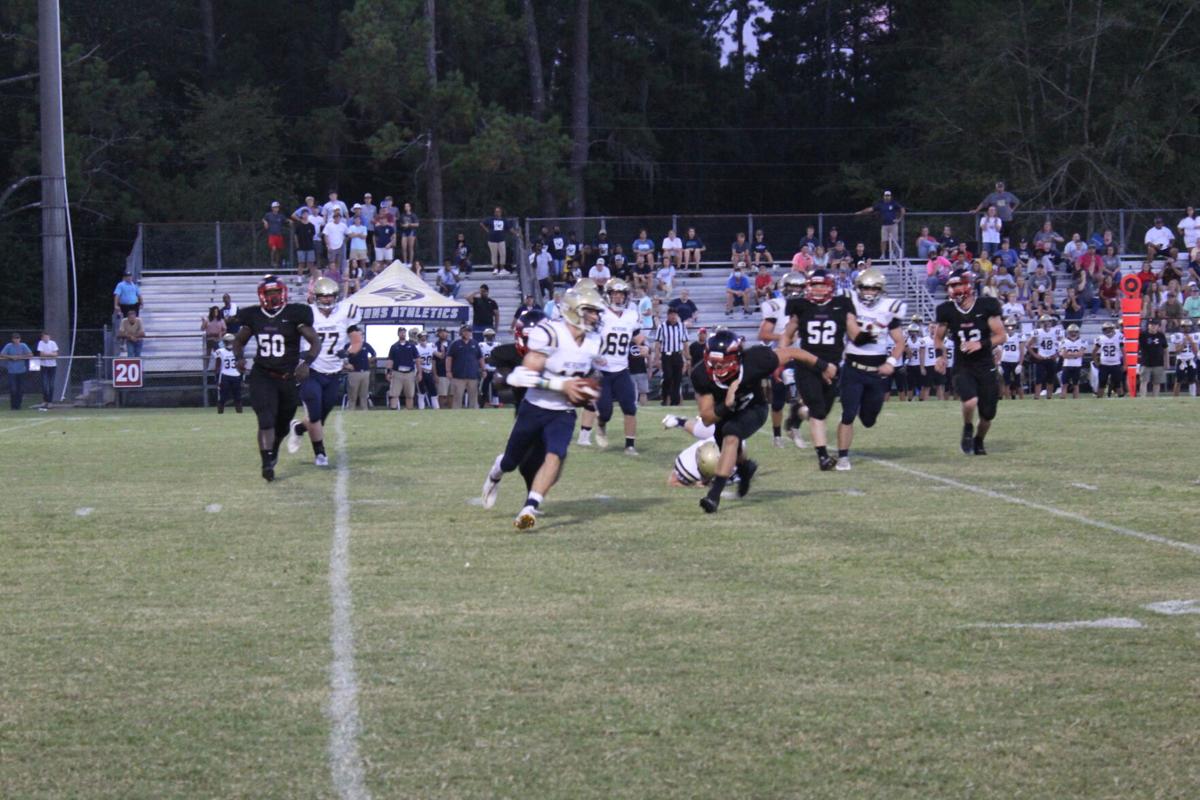 The Tribe keeps the herons down the field. 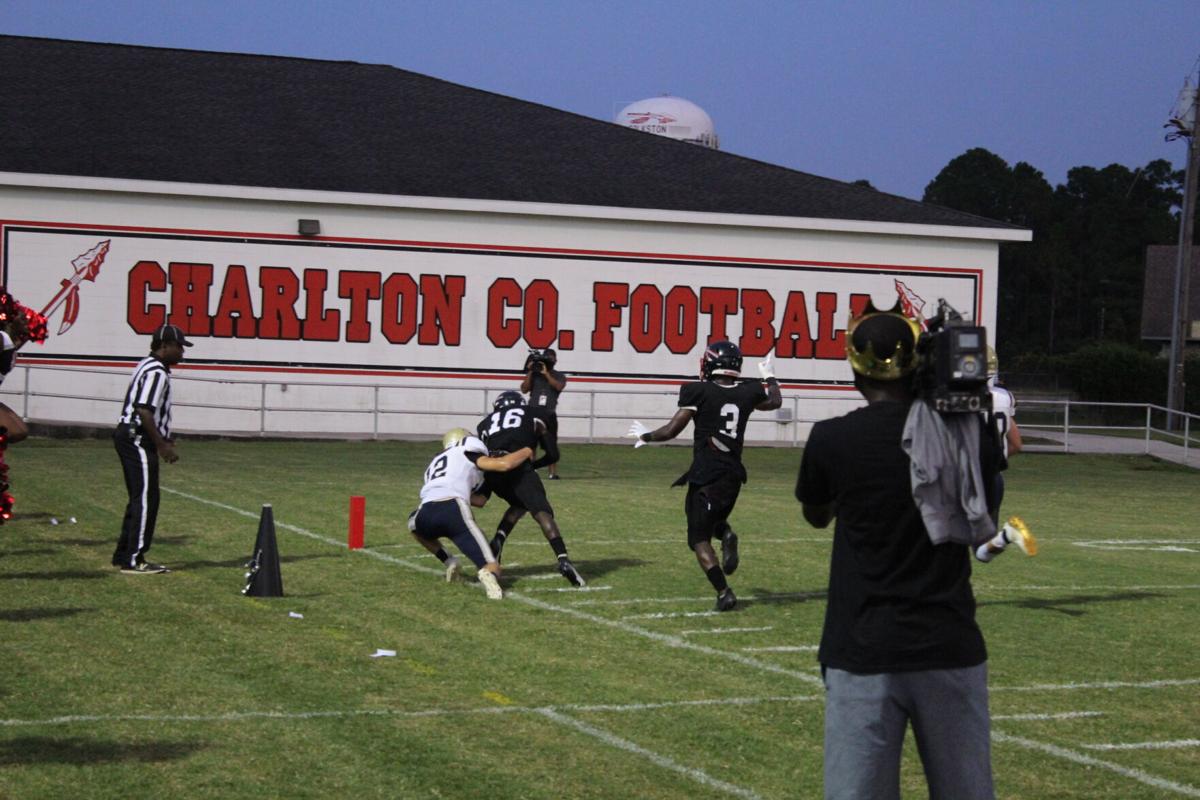 Najee Smith makes it into the endzone.

The Indians work on offense.

The Tribe keeps the herons down the field.

Najee Smith makes it into the endzone.

The Charlton County Indians scored on offense, defense, and special teams last Friday night, and opened the season with a 39-0 shutout of Brantley County at Champ Bailey Bailey Field in Folkston.

The Indian defense stepped up to the plate allowing the Herons just 50 yards of total offense, including negative yardage on the ground while also recording two safeties in the contest.

The offense got in on the act with two rushing touchdowns by Tony Cobb and a touchdown pass from Jaylen King to Najee Smith while the special teams unit ran back two kickoffs for scores.

Charlton opened the season with a bang when Keith Harris fielded the opening kickoff and outraced the Brantley defenders 92 yards for a touchdown. Wyatt Crews added the PAT and just 16 seconds into the season the Tribe held a 7-0 lead.

After holding the Herons to a three and out, the Tribe would take over from midfield for their first offensive possession. Charlton would use a short quick passing game to move down the field as King connected with Emari Williams, Kyler Williams, Cobb, and Tristan Herring to reach the eight yard line. Three straight carries by Cobb culminated with him crashing over the goal line from a yard out. Crews again added the PAT and with 4:30 left in the opening quarter the Indian lead was 14-0.

Charlton would hold again and take over in Brantley territory after a short punt. It seemed as if the Indians had scored again when King hit Smith from 40 yards out, but a penalty negated the score. The Indians would lose the ball on a turnover the very next play.

But the defense would get the ball back when Kyler Williams intercepted an errant Heron pass. But Charlton couldn't take advantage and the two teams would trade punts until the Tribe took over from the Heron 33 with 9:14 left in the half.

After a first down completion to Kyler Williams, Charlton got a 22 yard touchdown run by Cobb, but once again a penalty took the points off the scoreboard. But this time the Indians would rebound from their mistake, and on fourth down from the 25 King would connect with Smith and after Crews' PAT the Indians led 21-0.

Brantley had trouble with the kickoff and ended up being tackled on their own three yard line to start the drive. On the first play from scrimmage Craig Carlisle and Jaylen Lilley combined to tackle the Heron quarterback in the end zone for a safety to increase the lead to 23-0.

Brantley would have to kickoff from their own 20 following the safety and Cobb caught the kickoff at the Indian 41 and raced down the left sideline for a 59-yard touchdown. Crews PAT kick made the score 30-0 with 5:42 left in the half.

The Herons returned the kickoff out to midfield and put together their best drive of the night to that point. Brantley picked up their initial first down and moved to the Indian 27 before facing a fourth down and two yards to go. The Herons would fumble a pitchout and Braden Whittenburg fell on the loose ball to stop the Heron drive.

Neither team threatened the remainder of the half as the Indians led 30-0 at the break.

Brantley got the ball to start the second half, but had to punt and on Charlton's first drive, the Herons intercepted a pass and returned it to the Indian 42 yard line.

After marching down to a first down at the 12, the Herons were called for holding to back them up. Then Jaylen Lilley sacked the quarterback, forcing a third and long. Brantley set up a screen play to perfection and the back raced 37 yards to paydirt. But a blindside block behind the play was called, negating the Herons' score and eventually forcing a punt.

Starting at their own 20, the Tribe would get an eight-yard pass to Herring before Cobb picked up a first down on the ground. A late hit penalty followed by an unsportsmanlike conduct penalty moved the ball down the field 30 more yards. From there it was all Cobb picking up 18 yards on the ground and 12 through the air culminating on a two yard touchdown run. Crews PAT kick pushed the Indian lead to 37-0 with 9:20 remaining.

The Herons would once again mishandle the kickoff and would take over on their own seven yard line. On first down, the Brantley quarterback rolled right, but Carlisle and Dairion Jones combined to sack him in the end zone for their second safety of the night. The two points gave Charlton a 39-0 lead with 7:03 remaining.

With the running clock in effect backups for Charlton played on offense before the defense finished off the shutout to give the Indians an opening night win.

King passed for 150 yards completing 14 of 22 passes. Kyler Williams led the receivers with four catches for 75 yards. Cobb rushed for 38 yards and two scores to lead the rushing attack.

The Tribe will be off this week and return to action on September 18 when they travel to Ludowici to face Long County.