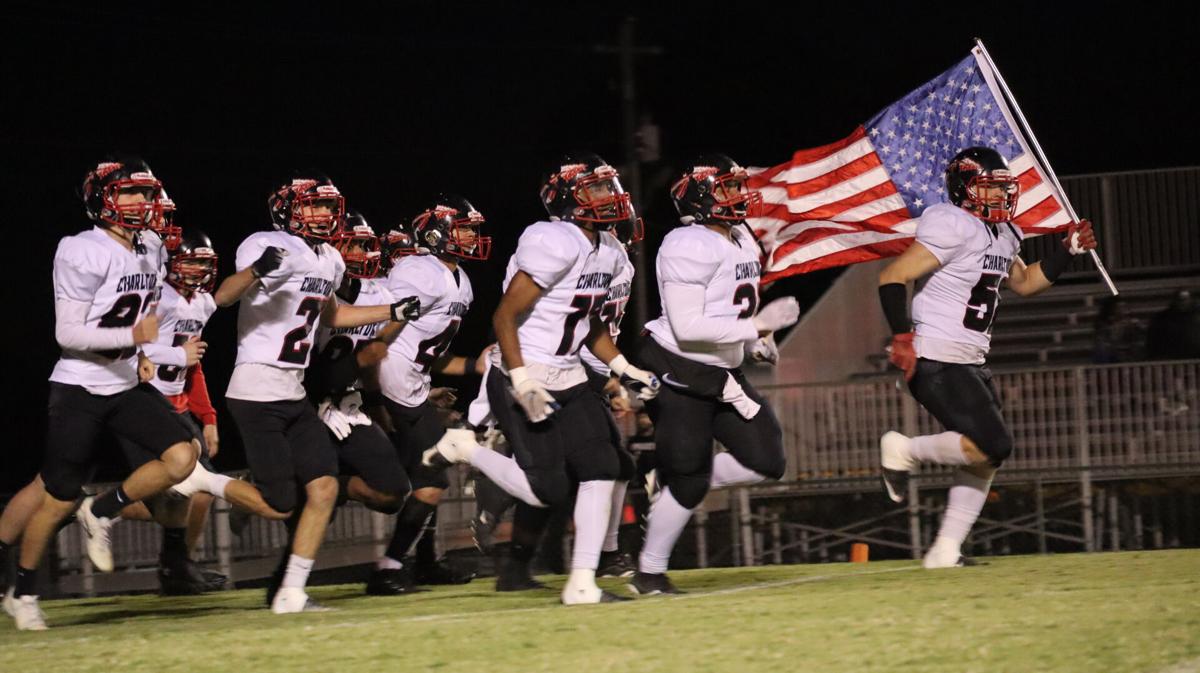 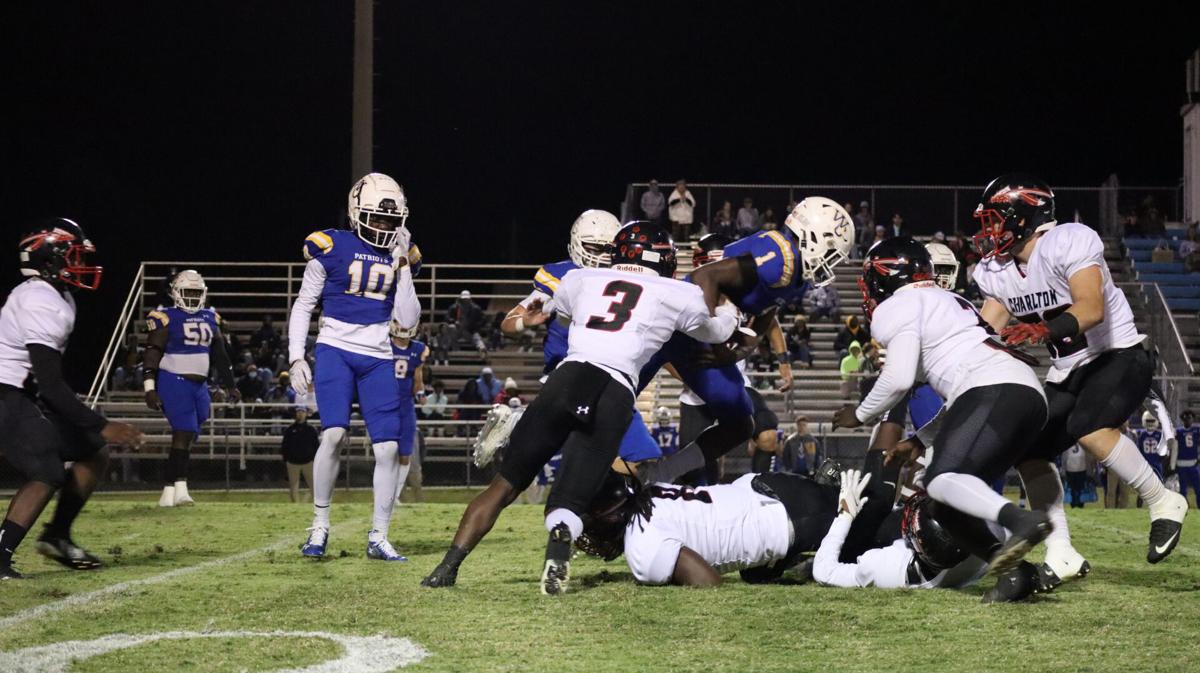 THE INDIANS WORK ON DEFENSE. 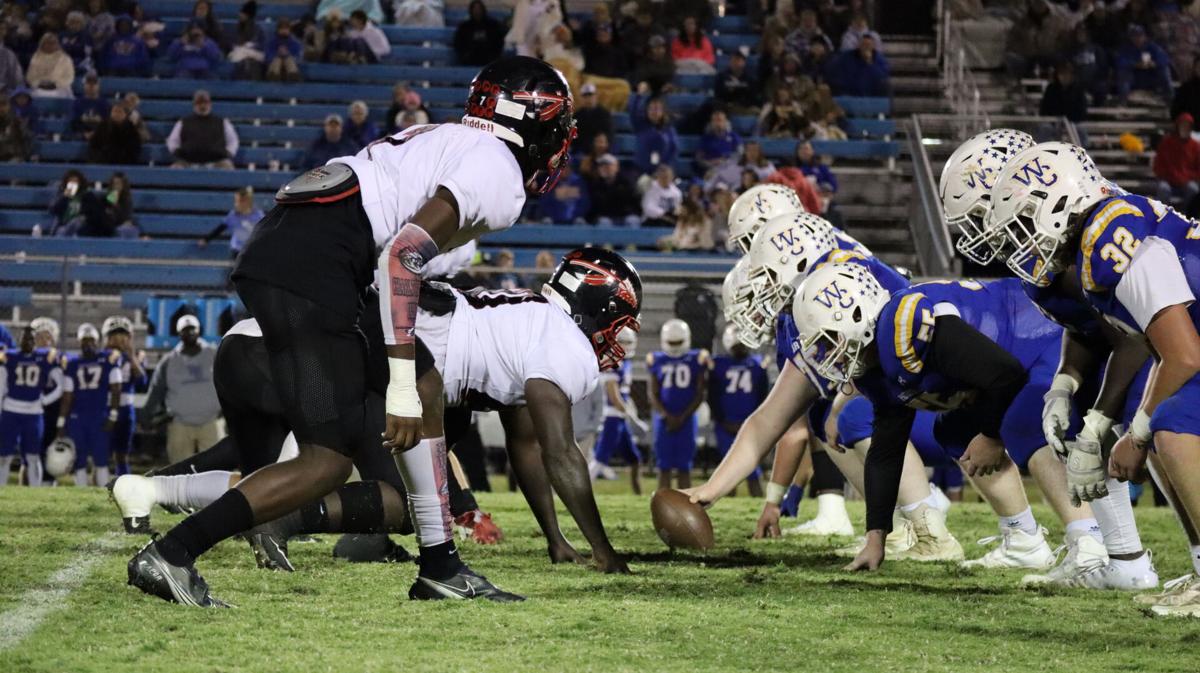 THE TEAM LINE UP FOR THE PLAY. 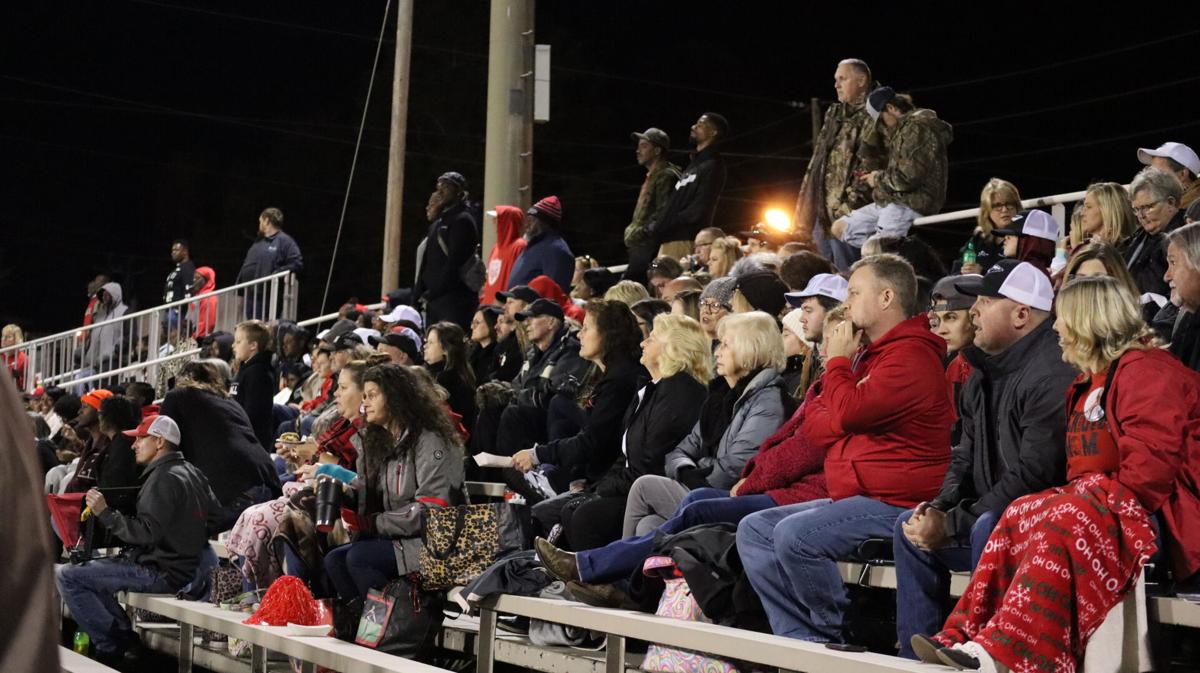 THE ROAD WARRIORS SHOW THEIR SUPPORT. 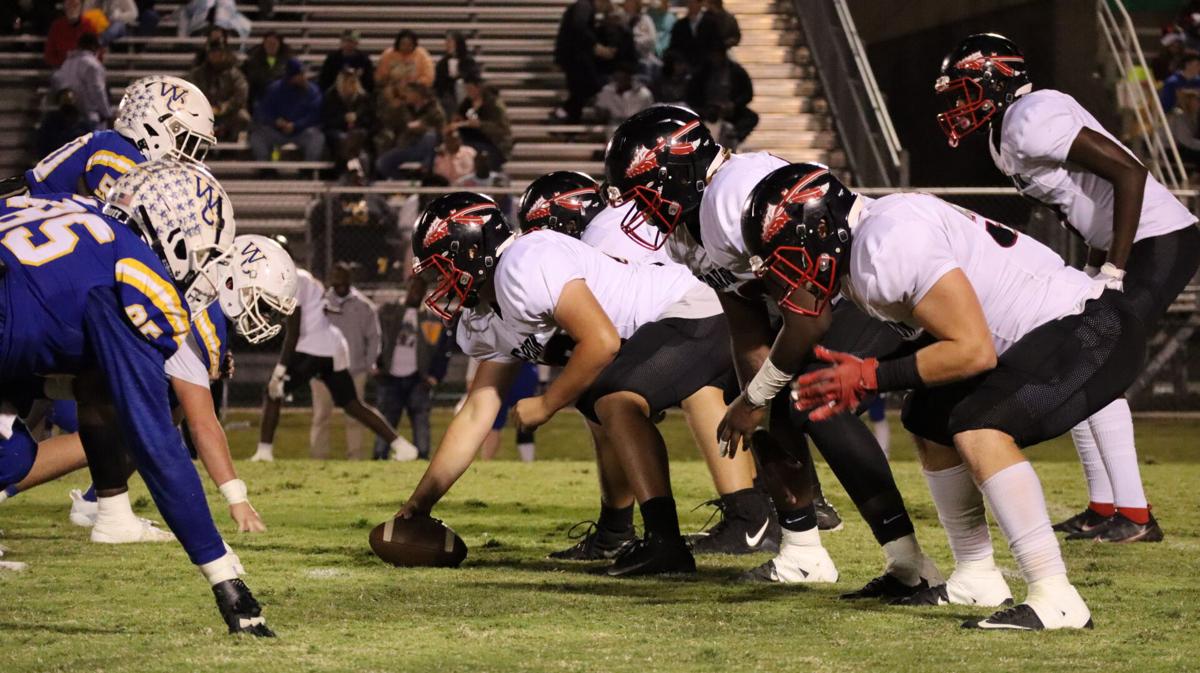 THE INDIANS LINE UP ON OFFENSE. 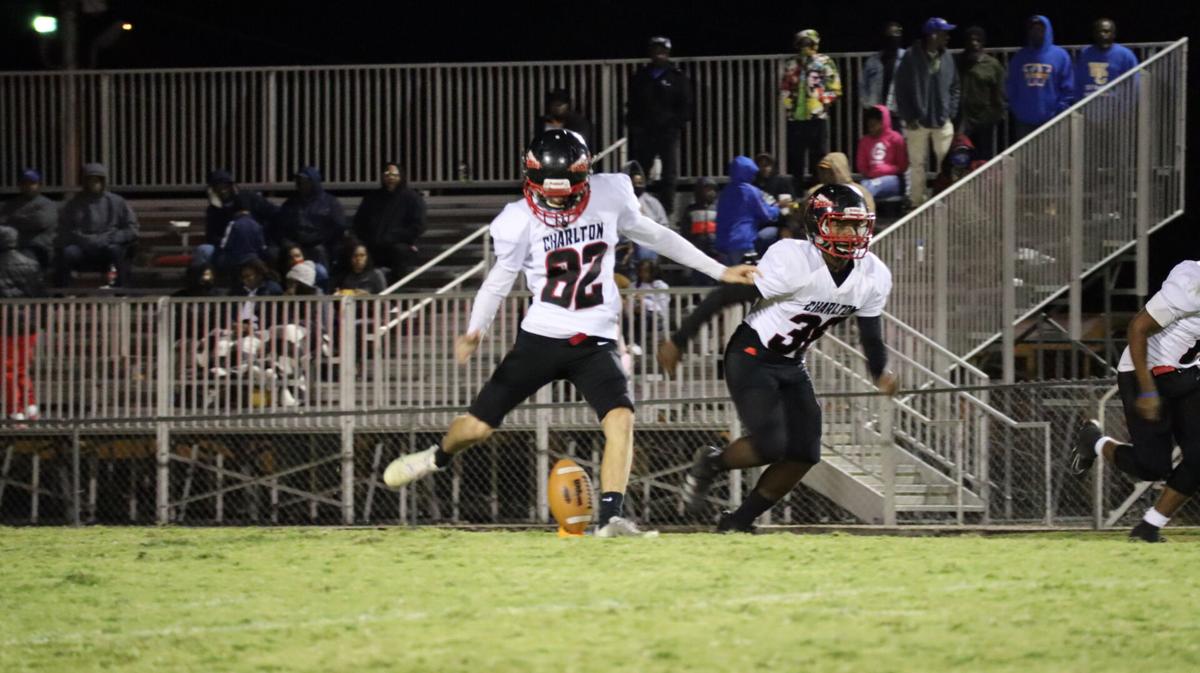 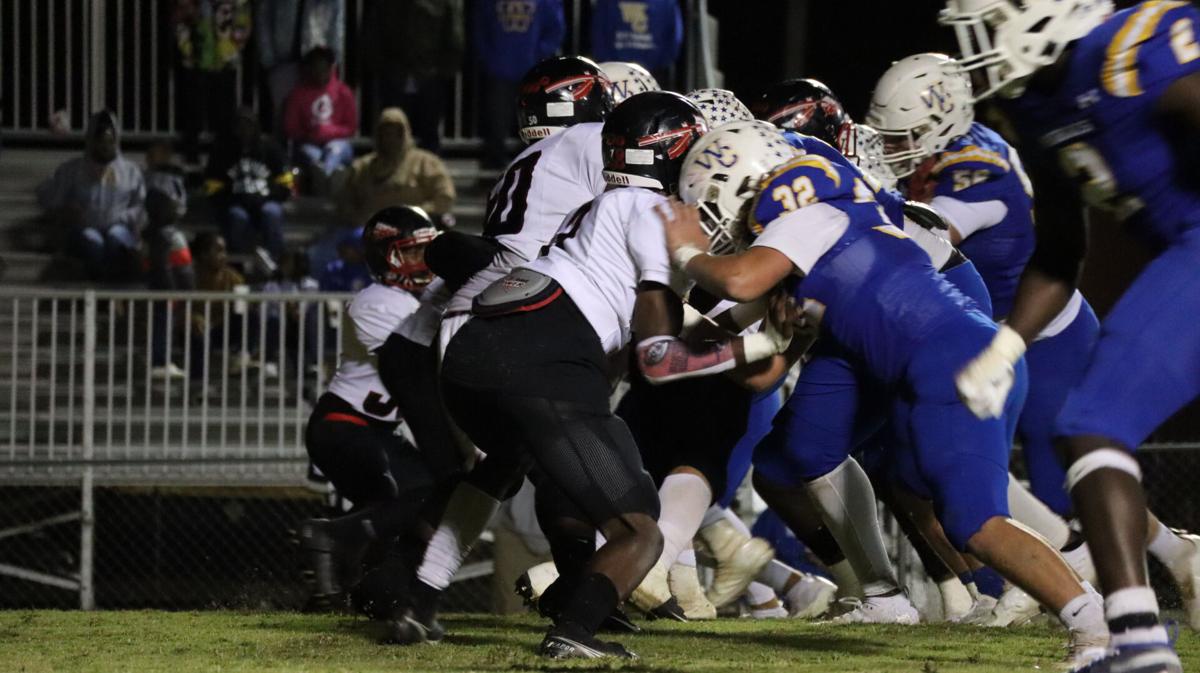 THE INDIANS HOLD STONG ON THE PLAY. 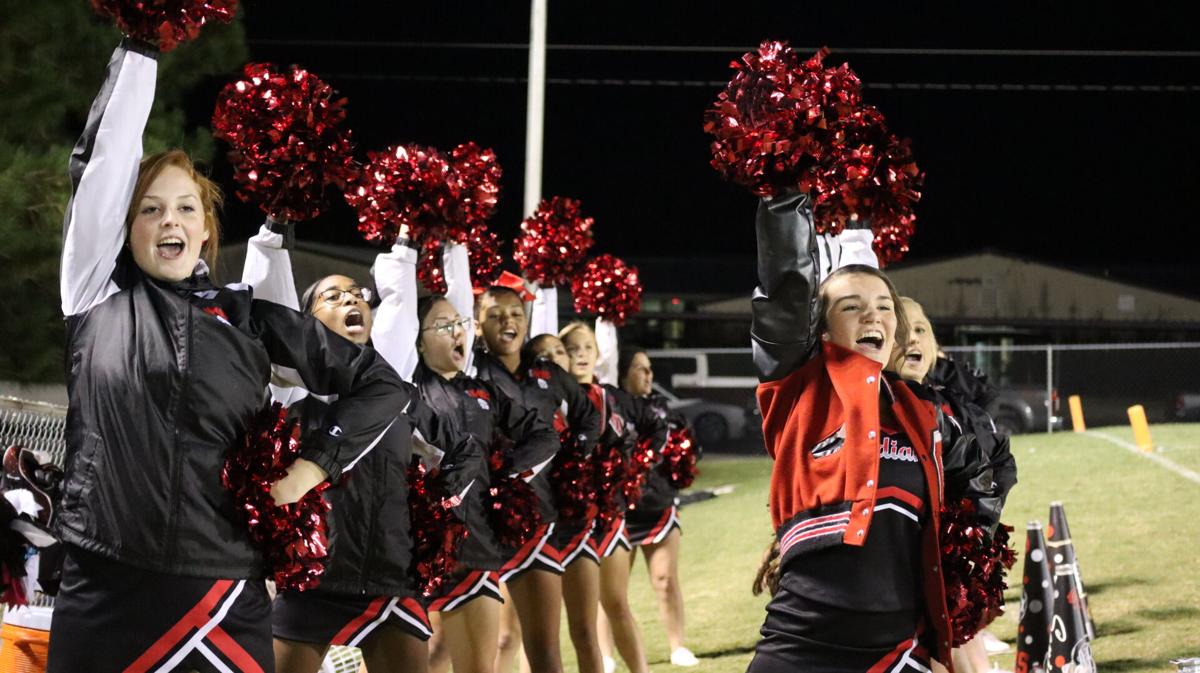 THE CCHS CHEERLEADERS BRAVE THE COLD TO KEEP THE TEAM PUMPED.

THE INDIANS WORK ON DEFENSE.

THE TEAM LINE UP FOR THE PLAY.

THE ROAD WARRIORS SHOW THEIR SUPPORT.

THE INDIANS LINE UP ON OFFENSE.

THE INDIANS HOLD STONG ON THE PLAY.

THE CCHS CHEERLEADERS BRAVE THE COLD TO KEEP THE TEAM PUMPED.

In a game in which the Charlton County Indians outgained the Wilcox County Patriots, the Tribe was unable to overcome four turnovers and other mistakes as they dropped a 36-26 decision in the first round of the GHSA Class A State Playoffs.

Jaylen Lilley reached 100 yards rushing for the ninth time this year, while quarterback Jaylen King played his best game of the season passing for 223 yards. But in the end it wouldn't be enough, as the Indians wrapped up their season with a 7-4 record after pushing the Region 4-A champions to the wire.

Neither team was able to pick up a first down on their opening possession, but a short punt by Wilcox gave the Indians the ball at the Patriot 45. A penalty pushed Charlton back to the 50, but on the first play Lilley broke free up the middle and outran the Patriot defense to the goal line for a 50 yard score. Wyatt Crews kicked the PAT and at the 9:18 mark of the opening quarter the Indians led 7-0.

Wilcox had a touchdown pass called back due to a penalty on their next possession, but ended up having to punt. But Charlton managed just one first down before punting the ball back to the Patriots.

Taking over from their own 35 the Patriots, aided by two Indian penalties, drove down to the one yard line in five plays. From there Wilcox ran it in and with the PAT tied the score at 7-7 with 2:22 left in the first quarter.

After the kickoff the Indians would fumble and lose the ball on their second play with Wilcox taking over at the Indian 37. They would get to the 29 before facing a fourth down. The Indian defense stepped up and dropped the Patriot runner for a four yard loss to regain possession.

But Charlton was unable to advance the ball and a short punt gave Wilcox great field position again at midfield. In three plays the Patriots found the end zone again scoring on a 29 yard touchdown pass. The extra point was good and Wilcox held a 14-7 lead with 8:34 left in the half.

The Tribe would take the kickoff and behind runs by King and Lilley along with a pass to Elyiss Williams moved down to the Patriot 35. But a fourth down pass went awry and Wilcox took over on downs.

On the first play the Patriots found a wide open receiver downfield and connected on a 65 yard touchdown pass. The Patriots ran in the two point conversion and with 4:12 left in the half increased their lead to 22-7.

But the Tribe showed their fighting spirit. Taking over from their own 39, King ran for five yards then connected with Emari Williams twice for 28 yards and to Lilley for 14 more. After a King run and an Indian penalty the ball sat at the 13 yard line. Lilley ran twice for 11 yards and King punched it over the goal line from two yards out with 0:35 left in the half. Crews PAT cut the Patriot lead to 22-14 as the teams entered the half.

Wilcox received the second half kickoff, but was stymied when Jorge Rivera sacked the Patriot quarterback forcing a punt. King would then hit Najee Smith twice for 42 yards down to the 11 yard line. Lilley ran for seven yards on first down and the following play completed the drive with a four yard run. The Indians attempted to tie the score with a two point conversion, but the pass was just out of reach leaving the Tribe down 22-20 with 7:59 left in third quarter.

Wilcox would then drive from their own 36 to the Indian 12 yard line. But the defense held and a 29 yard field goal was wide keeping the score at 22-20. But on Charlton's first play King's pass was intercepted and Wilcox had the ball at the 17.

Wilcox drove down to the ten and was called for roughing the passer keeping the Patriots drive alive. Two plays later they found the end zone from four yards out. The PAT was good and with 2:15 left in the third quarter the Wilcox lead was up to 29-20.

But Charlton wouldn't lay down as they drove from their own 40 down to the one yard line. But they would fumble at the goal line and Wilcox recovered at the one.

With time not on their side the Indian defense held Wilcox to a three and out forcing a punt. Taking over from the Patriot 45, it wouldn't take long for the Indians to strike. King found Kyler Williams behind the defense for a 45 yard touchdown. After a high snap on the PAT the kick was blocked and the Indians trailed 29-26 with 7:36 remaining.

Again the defense stepped up and forced another punt, but the punt was muffed and the Patriots fell on the loose ball at the Indian 28. Seven straight runs led Wilcox into the end zone scoring on a one yard run. The PAT was good and Wilcox led 36-26 with just 2:51 left in the game.

Charlton would move into Wilcox territory with a long pass to Smith, but were unable to advance any further before turning the ball over on downs. Wilcox was able to take a knee three times to run out the clock and put an end to the Indians' season.

Smith closed out his career with four catches for 93 yards, while Lilley's 100 yards rushing led the Tribe.

Charlton will lose several important seniors, but will return a good nucleus for next year.