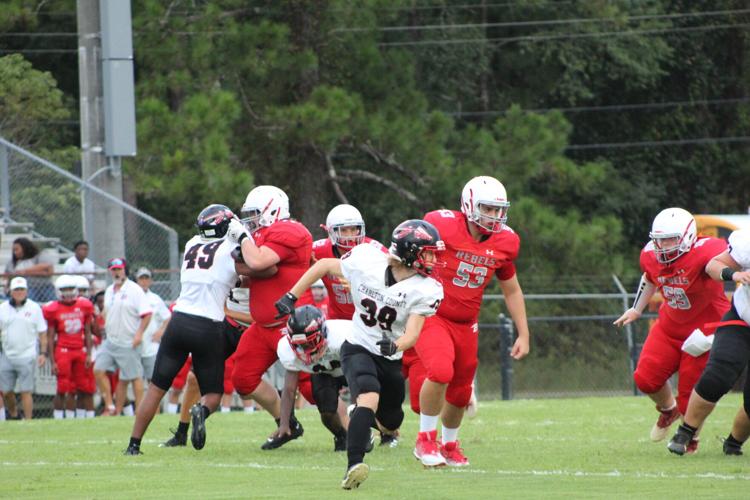 JV PLAYED IN THE SCRIMMAGE'S BEGINNING AND GAVE BERRIEN A RUN FOR ITS MONEY.  ABOVE IS 39 RUNNING DOWN THE LINE AT THE START OF A PLAY. 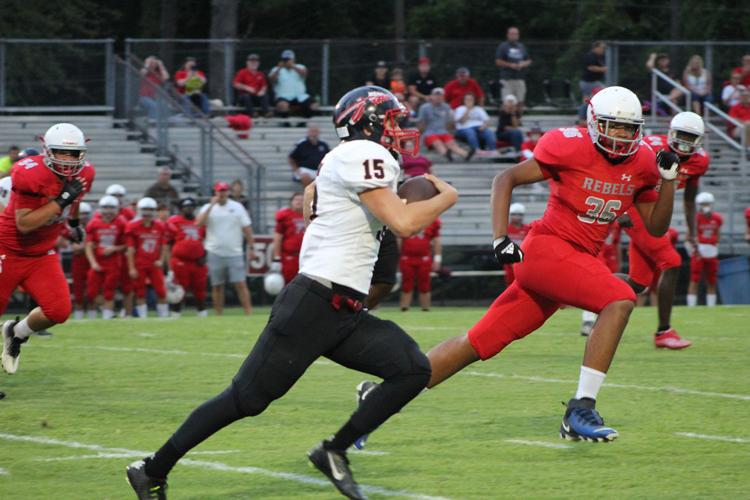 VARSITY CARRIED THE SECOND-HALF OF THE SCRIMMAGE.  ABOVE IS PLAYER 15 RUNNING TO GET PAST BERRIEN'S DEFENSE.

JV PLAYED IN THE SCRIMMAGE'S BEGINNING AND GAVE BERRIEN A RUN FOR ITS MONEY.  ABOVE IS 39 RUNNING DOWN THE LINE AT THE START OF A PLAY.

VARSITY CARRIED THE SECOND-HALF OF THE SCRIMMAGE.  ABOVE IS PLAYER 15 RUNNING TO GET PAST BERRIEN'S DEFENSE.

The Charlton County Indians and Berrien Rebels matched up last Friday night at Champ Bailey Field and allowed the coaches a chance to see their players compete against somebody else in preparation for the season opener this Friday night at Jeff Davis.

In the JV portion of the scrimmage, both teams got the ball for six minutes of offense. Berrien got the ball first and the Rebels picked up three first downs and were able to reach the Indians’ 30, but that would be as deep as they would go. Isaac Bryant was all around the ball for the Indian defense making multiple tackles.

Charlton took possession and got a 20-yard run by Thomas Johnson and then several plays later, Quarterback Ayden Crews kept the ball and raced 51 yards to paydirt. Garrett Stevenson kicked the PAT for the 7-0 lead. Penalties would plague the Indians the remainder of the way with several long runs by Omari Wilson getting called back due to holding.

The remaining three quarters were the varsity scrimmage. In the first quarter, neither team could mount a drive with each team punting three times, but the scoring picked up in the second quarter. Berrien fumbled on their opening possession and Jorge Rivera fell on the loose ball for the Indians at the Rebel 34. Runs by Jaylen Lilley and Jaylen King got the ball to the 26, where Lilley would take it to the house from there. Stevenson kicked the PAT and the Tribe led 7-0.

But on the first play of the next Rebel series, their quarterback kept it around right-end and outraced the Indians 70 yards to the end zone. The PAT kick failed and the Tribe still led 7-6.

On Charlton's next drive, they took over from their own 30 and moved it across midfield to the 44. Once again, it would be Lilley taking it to the end zone from there. Stevenson's PAT pushed the Indian lead to 14-6.

The teams would trade punts and Berrien took over from their 15 yard line. On first down, Berrien dropped back to pass, but pressure from Elyiss Williams and Xavier Swift allowed them to tackle him in the end zone for a safety, increasing the lead to 16-6 with 0:41 left in the quarter.

Entering the final period, the teams traded punts before the Indians drove down to the forty and turned it over on downs.

Taking over with 4:44 left, Berrien struck quickly covering the 60 yards on just five plays scoring on a 13 yard run. The PAT failed and the lead was cut to 23-12.

With 3:06 left, the Tribe tried to run out the remainder of the clock. A big 49-yard run by Nathan Hamlette pushed the ball down to the Rebel 15 yard line. But a holding penalty pushed the ball back and then a bad snap from center was recovered with just 0:44 remaining.

A holding penalty pushed Berrien back to the 22.   But on second down the Rebels threw a  deep pass that was completed as two Indian defenders ran into each other and the play would go 65 yards with just 16 seconds left. The two-point try failed and the Indians came out on top 23-18 in the varsity portion of the scrimmage.