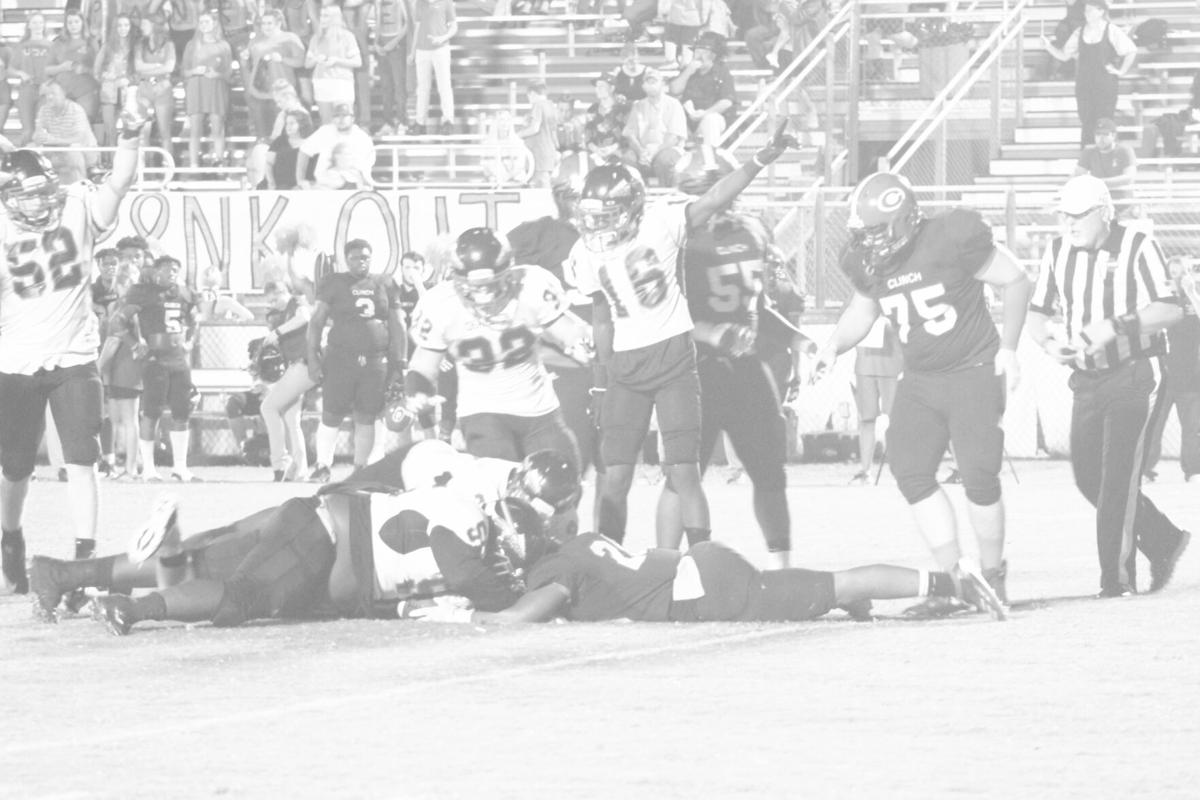 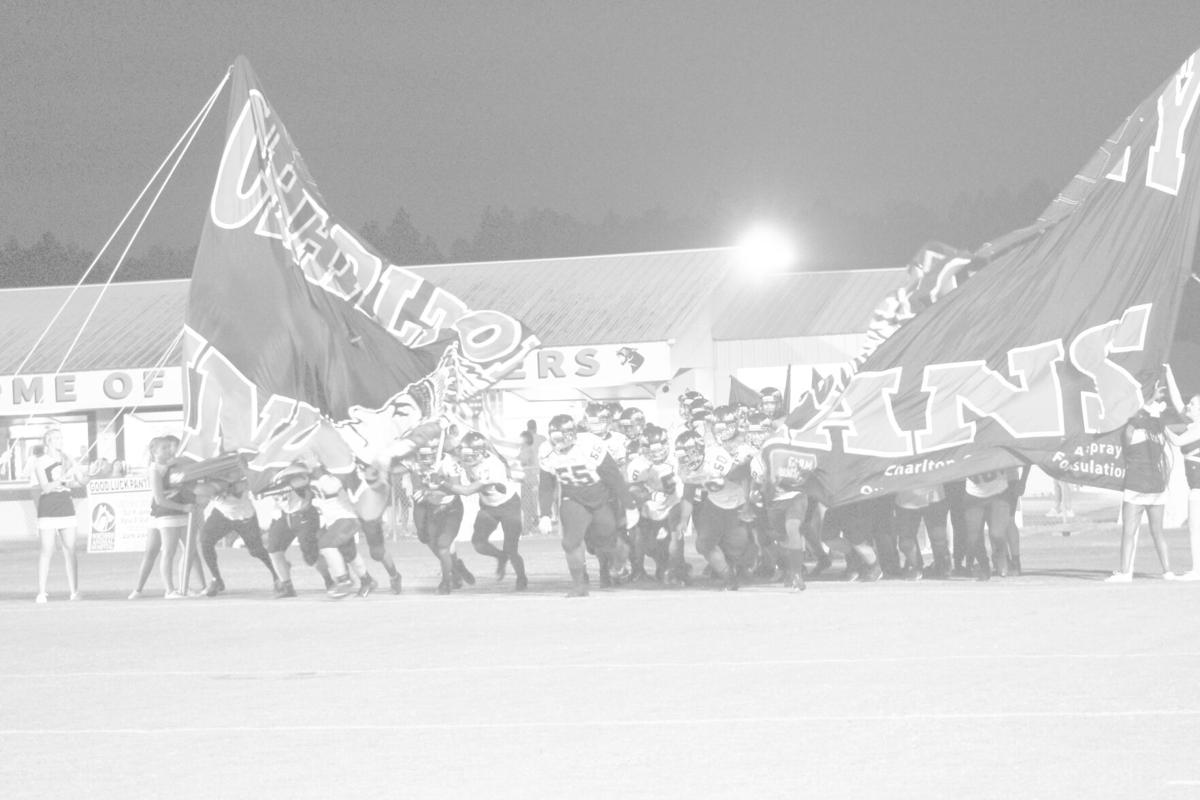 The Tribe takes the field. 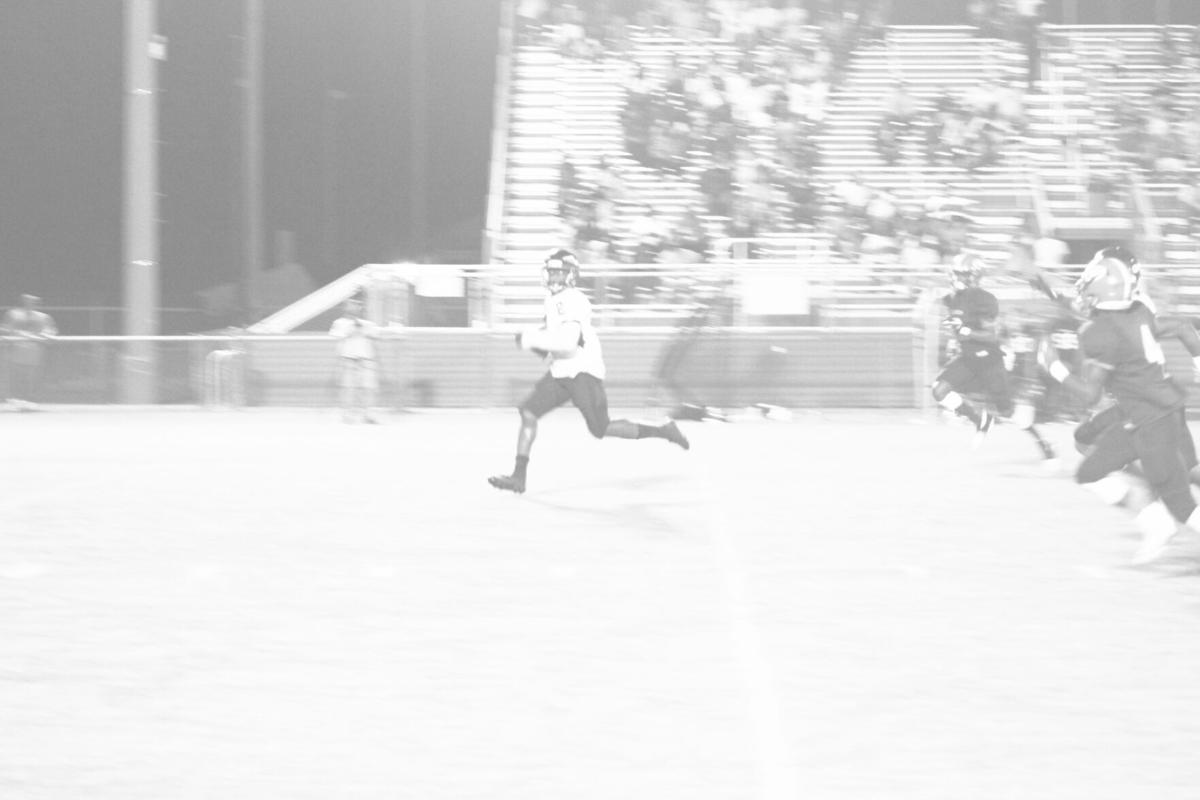 Jaylen Lilley rushes to the endzone followed by a pack of panthers.

The Tribe takes the field.

Jaylen Lilley rushes to the endzone followed by a pack of panthers.

The Charlton County Indians went into Homerville last Friday night and knocked off fifth ranked Clinch County 18-14 in the annual Swamp War classic. The win ended a six game skid the Tribe had against the Panthers, and more importantly gives the Indians a 1-0 mark in Region 2-A play.

The Indians got solid play from all three phases of the game as the offense came up big when needed, the defense created four turnovers and the special teams kicked two field goals to aid in the win.

Both teams picked up a first down on their initial series', but ended up punting. Clinch would take over with 4:38 in the first quarter and only needed four plays to cover 90 yards scoring on a 26 yard run at the 2:50 mark. However, on the PAT attempt Clinch was penalized twice backing up the attempt which sailed wide leaving the Panthers with a 6-0 lead.

Charlton took over from their 40 after the kickoff, but a penalty backed them up to the 25.  A pass interference against the Panthers was followed by three runs by Tony Cobb to pick up the first down at midfield. Quarterback Jaylen King connected with Najee Smith and Kyler Williams and along with a few short runs, the Indians had a first down at the Panthers’ 12 yard line. But three plays netted just three yards and Wyatt Crews came on and kicked a 26 yard field goal to cut the lead in half at 6-3 with 9:30 left in the half.

On the first play after the kickoff the Panthers fumbled and Caleal Burroughs fell on the loose ball giving the Tribe great field position at the 17 yard line. Two runs by Cobb gave Charlton a first and goal from the three. An offsides penalty pushed the ball just outside the one and it looked as if the Indians were about to take the lead. But two plays lost eight yards, and after an incomplete pass the tribe had to settle for another 26 yard field goal by Crews. The kick was good and with 7:22 left in the half the game was tied at 6-6.

Neither team threatened the remainder of the half and the teams went into the locker room deadlocked.

Clinch received the second half kickoff and came out on fire. The Panthers needed just five plays to go 63 yards scoring on a four yard run. The run for two points was good and Clinch took a 14-6 lead at the 9:58 mark of the third quarter.

The Tribe would come right back down the field and highlighted by a 31 yard pass to Tristan Herring and a key fourth down completion to Emari Williams the Indians had first and goal from the eight yard line. Then a strange sequence of events occurred. First a delay of game cost the Tribe five yards. Then they were called for a chop block and two subsequent unsportsmanlike conduct penalties occurred and next thing you knew it was first and goal from their own 38 yard line.

The teams would trade punts back and forth into the fourth quarter when the Tribe took over from their own 33. Jaylen Lilley picked up seven yards and Cobb added another yard run setting up a third and two. Lilley took the direct snap and ran into the teeth of the Panther defense picking up the first down and more as he raced 59 yards to paydirt to cut the Clinch lead to 14-12. The run for the two point conversion failed and with 9:17 left in the game the Indians still trailed by two points.

Charlton would force and three and out on defense and get the ball back at their own 42.  A three yard run by Cobb and a 15 yard scamper by Lilley was followed by a diving 29 yard from to Herring down to the eleven yard line. After a penalty pushed them back to the 16, Herring caught a ten yard pass to the six. But the drive stalled and Crews came on to kick a 22 yard field goal that would give Charlton the lead. But the snap was mishandled and the kick was never attempted as Clinch took over from the 14 with 5:11 remaining.

Clinch drove out to the 32, but the Indians forced another fumble and Braden Whittenburg fell on the loose ball at the 28 with 2:26 left.

With Lilley lined up at quarterback the snap got away from him, but he picked it up and raced around right end and outran the Panther defenders to the end zone for a 28 yard touchdown run. Charlton went for two again, but failed leaving them with an 18-14 lead with 2:16 left on the clock.

On the ensuing kickoff Clinch fumbled again and Whittenburg was in the right spot and recovered for the Indians at the 35. Needing just a first down to run out the clock the Tribe made things interesting. Another misfired snap cost the Tribe 17 yards and they would eventually have to punt the ball back to the Panthers.

Cobb's punt pinned Clinch back to their 17 with 1:35 left. Clinch picked up 20 yards on a completion and a quarterback scramble, but on the next play Jamari Hamilton intercepted the deep pass and returned it back to the Panther 31 with just 36 ticks left on the clock.

Charlton lined up in victory formation and one snap was all it took to run out the clock and let the celebration begin.

Lilley ran for 95 yards while Cobb added 76 more on the ground. King completed nine passes for 155 yards with Herring on the receiving end of four of those for 101 yards.

Defensively, Najee Smith was in on eight tackles, while Lilley added seven tackles. Whiitenburg recovered two fumbles and Burroughs had one, while Hamilton came up with the game saving interception.

The Indians will host Turner County this Friday in another key Region 2-A matchup.