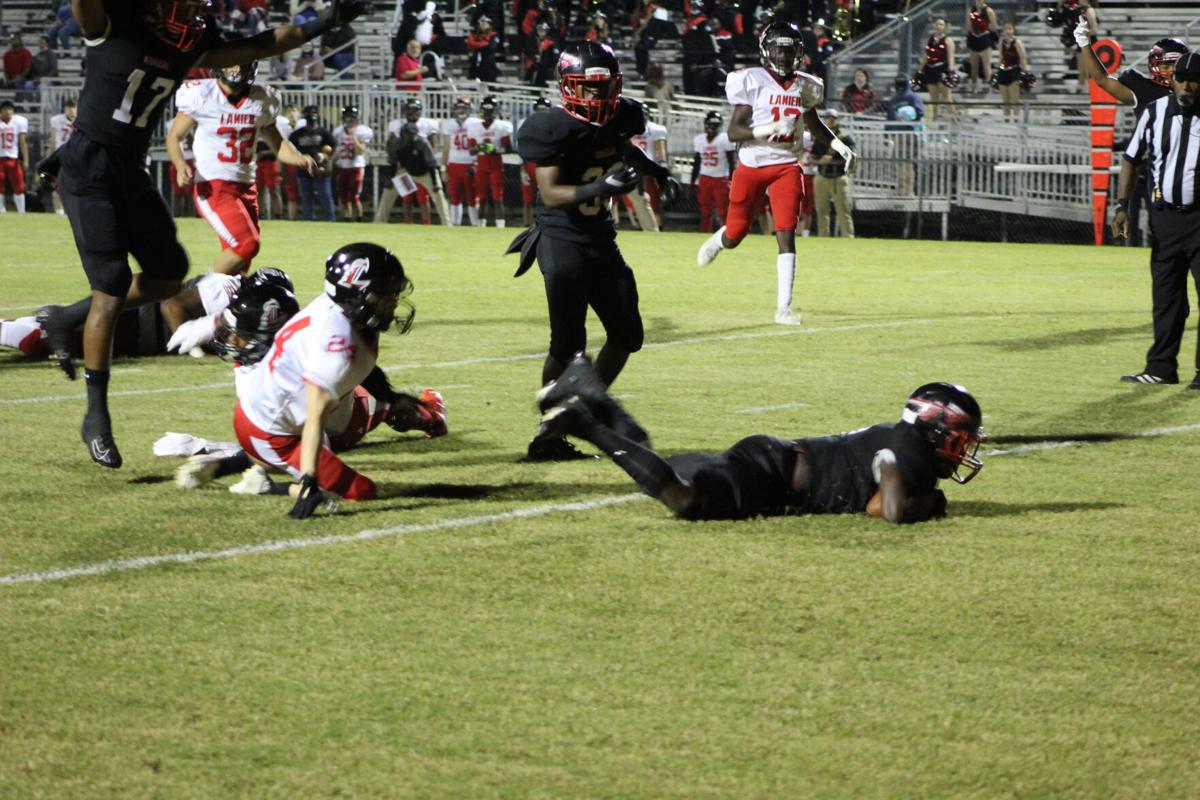 The Tribe Takes the Ball 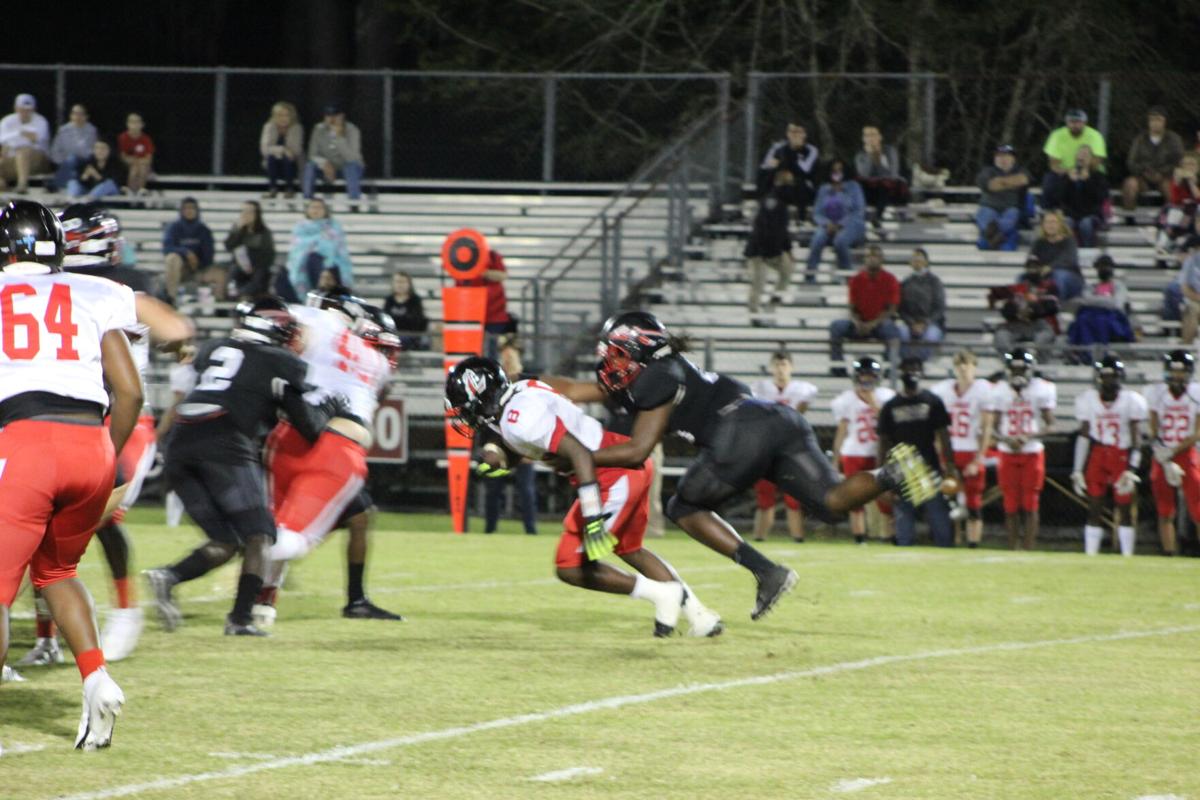 The Indians Stop the Play 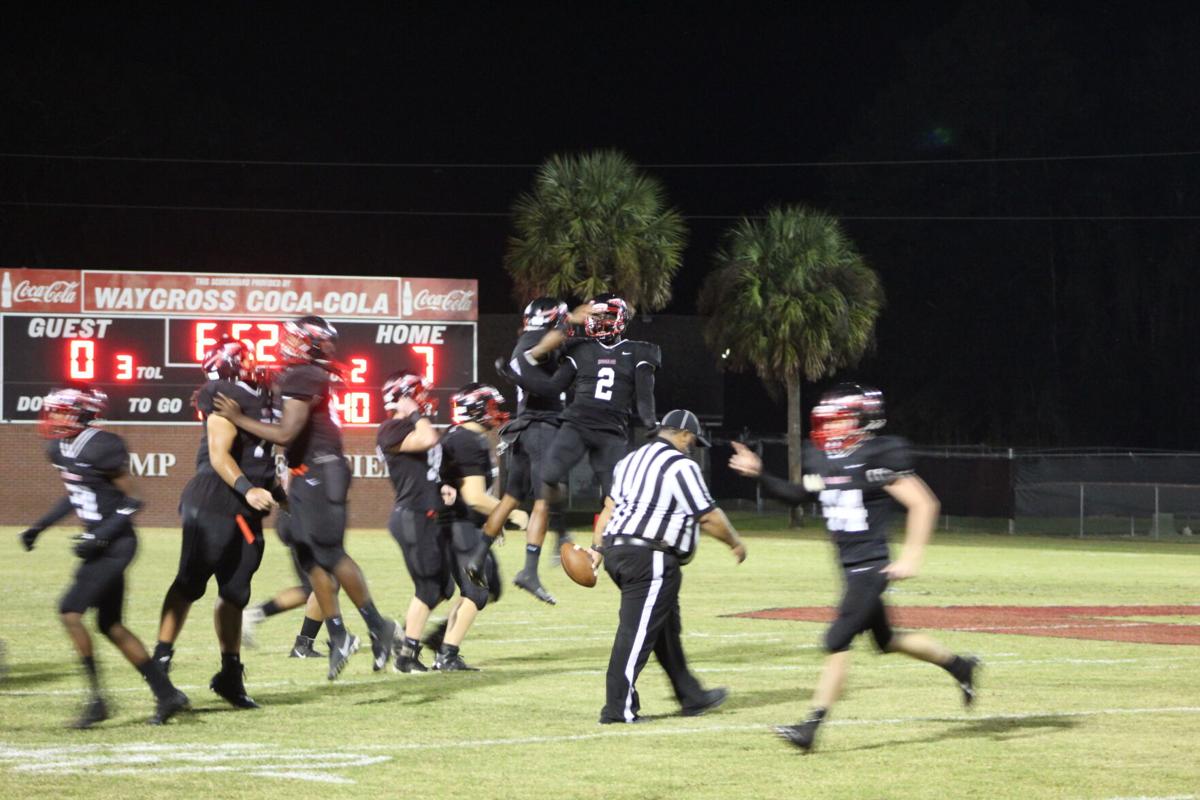 The Boys Celebrate a Big Play 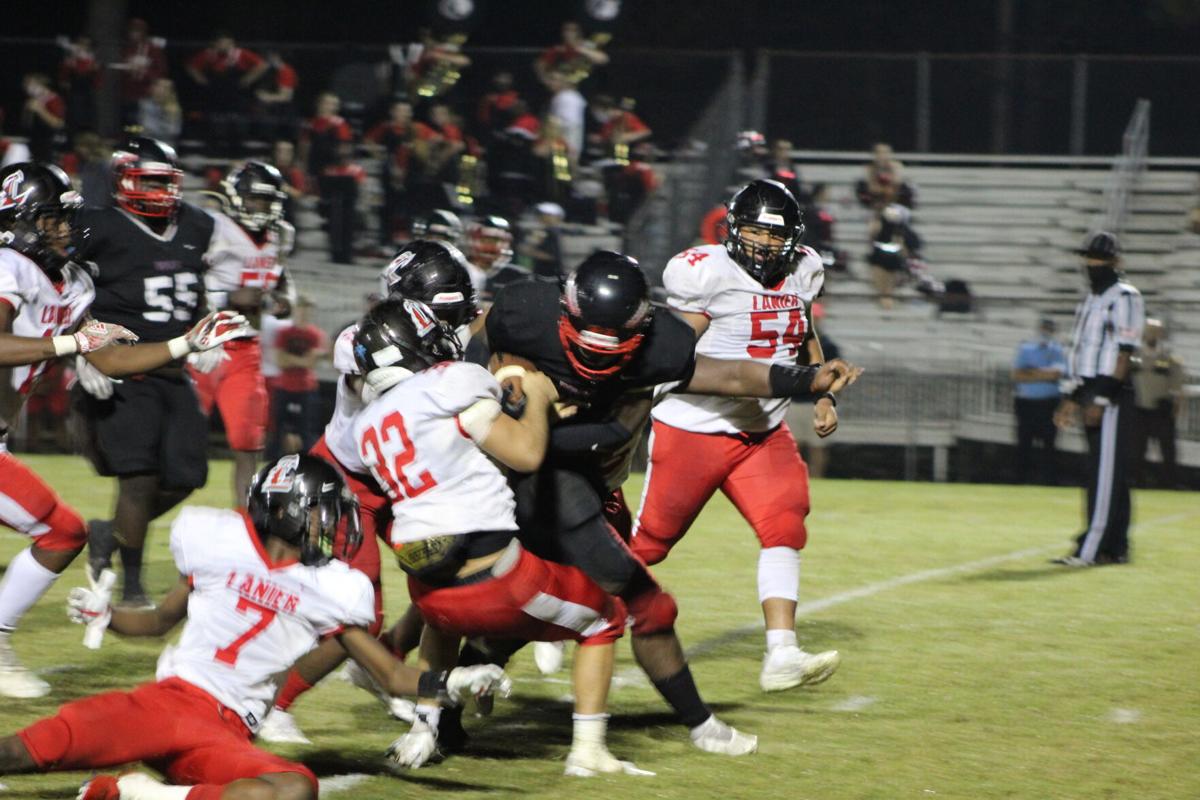 The Indians Push Through On The Way To The End Zone

The Tribe Takes the Ball

The Indians Stop the Play

The Boys Celebrate a Big Play

The Indians Push Through On The Way To The End Zone

The Charlton County Indians used a strong rushing performance by Tony Cobb and a defense that created six turnovers to even their record at 4-4 after knocking off region foe Lanier County 31-21 last Friday night at Champ Bailey Field.

The Tribe got off to a fast start when Lanier fumbled the opening kickoff and Braden Whittenburg fell on the loose ball at the 19 yard line. Cobb picked up seven yards on first down and then went the remaining 12 yards on the following play. Wyatt Crews kicked the PAT and just 23 seconds into the game the Indians led 7-0.

Both teams traded punts until Asad Akbar recovered another Bulldog fumble at the 41 yard line. Jaylen King connected with Emari Williams for a short gain before Cobb rushed five straight times for 38 yards down to the one yard line. But on first and goal the snap sailed over King's head and he recovered back at the 15. The Tribe couldn't convert and ended up missing a field goal.

The Indian defense stepped up once again with Kyler Williams intercepting a Lanier pass at the 22 yard line. King hit Najee Smith with an 11 yard pass and the Tribe looked to be in business again. But another scoring opportunity was squandered when they fumbled on the next play with Lanier recovering as the first quarter expired.

The Bulldogs would connect on a long 43 yard pass and after an Indian penalty had the ball at the 35. Again the Bulldogs went deep finding an open receiver to cover the final yardage. Nathan Johnson blocked the PAT and with 8:43 left in the half the Indians still led 7-6.

Neither team threatened until the Tribe took over from their on 23 with 6:04 left before halftime. Cobb ran four times for 17 yards before King hit Kyler Williams for 49 yards down to the 11yard line. An Indian penalty seemed as if it would deny Charlton getting points once again, but King hit Smith for 11 yards to put the Indians back into field goal range. With 1:47 left in the half Crews kicked a 30 yard field goal to put the Tribe ahead 10-6.

On Lanier's possession after the kickoff Smith intercepted a pass for the fourth turnover by the Indian defense. But not enough time remained for the Indians to take advantage and the teams entered the locker room at the break with Charlton holding on to the 10-6 lead.

Charlton started the second half at the 35 after the kickoff went out of bounds. Behind four runs by Cobb totaling 35 yards and completions from King to Smith, Tristan Herring, and Keyshawn Hobbs the Indians were set up at first and goal from the three. King kept the ball for two yards before Cobb scored from a yard out. Crews kicked the PAT and the Indian lead grew to 17-6 at the 6:53 mark of third quarter.

The Indian defense was back at it again on Lanier's next possession when Jay Harris fell on a fumble to get Charlton just across midfield. The Tribe would advance down to the 23 before they turned the ball over on downs after coming up just short on fourth down.

Lanier would use three runs and three passes to move into Indian territory at the 29. From there another pass went for a touchdown. The pass for two points was good and the Charlton lead was just three points at 17-14 with 11:51 remaining.

The Indians would respond after the kickoff. Two passes to Smith and a Cobb run moved the ball out to the 45. King then connected with Tristan Herring for 38 yards to the 17 yard line. Three runs by Cobb finished off the drive with him scoring from four yards out. Crews' PAT made the score 24-14 with 9:09 remaining.

Lanier would take the kickoff and move just across the 50. The Bulldogs tried a screen pass, but Jamie Jackson sniffed it out and stepped in front for an interception that he returned to the 13.

A Charlton penalty pushed them back five yards, but Cobb picked up the first down at the one after runs of seven and ten yards. Another penalty backed up the Indians to the six, but on the next play Cobb would go six yards to score his fourth touchdown of the night. Crews' PAT kick increased the lead to 31-14 with 7:01 left.

The Bulldogs battled back and would score on a 30 yard touchdown pass at the 5:34 mark to cut the lead to ten at 31-21. Lanier then successfully recovered an onsides kick and then connected on a long pass to the Indian 20 yard line. But Dairion Jones came through with a big sack and the Lanier drive came to a halt.

The Tribe couldn't move the ball and had to punt, but Lanier was unable to take advantage after four straight incomplete passes. Charlton took back over with 2:48 left. Three Cobb runs totaling 21 yards allowed King to take a knee and let the remaining time tick off the clock.

For the night Cobb was a workhorse carrying the ball 37 times for 208 yards scoring all four Indian touchdowns. King passed for 174 yards to keep the defense honest. Smith led the Tribe with six catches while Kyler Williams caught two passes for 55 and Herring caught three for 50 yards.

Defensively, Asad Akbar had a big night after being in on 12 tackles including six solo stops along with a fumble recovery.

The Indians will host Brooks County on Tuesday at 6:00 p.m. to make up the postponed game from several weeks back and then will wrap up the regular season Saturday when they travel to Pearson to play Atkinson County in a game that will start at 6:30 p.m.