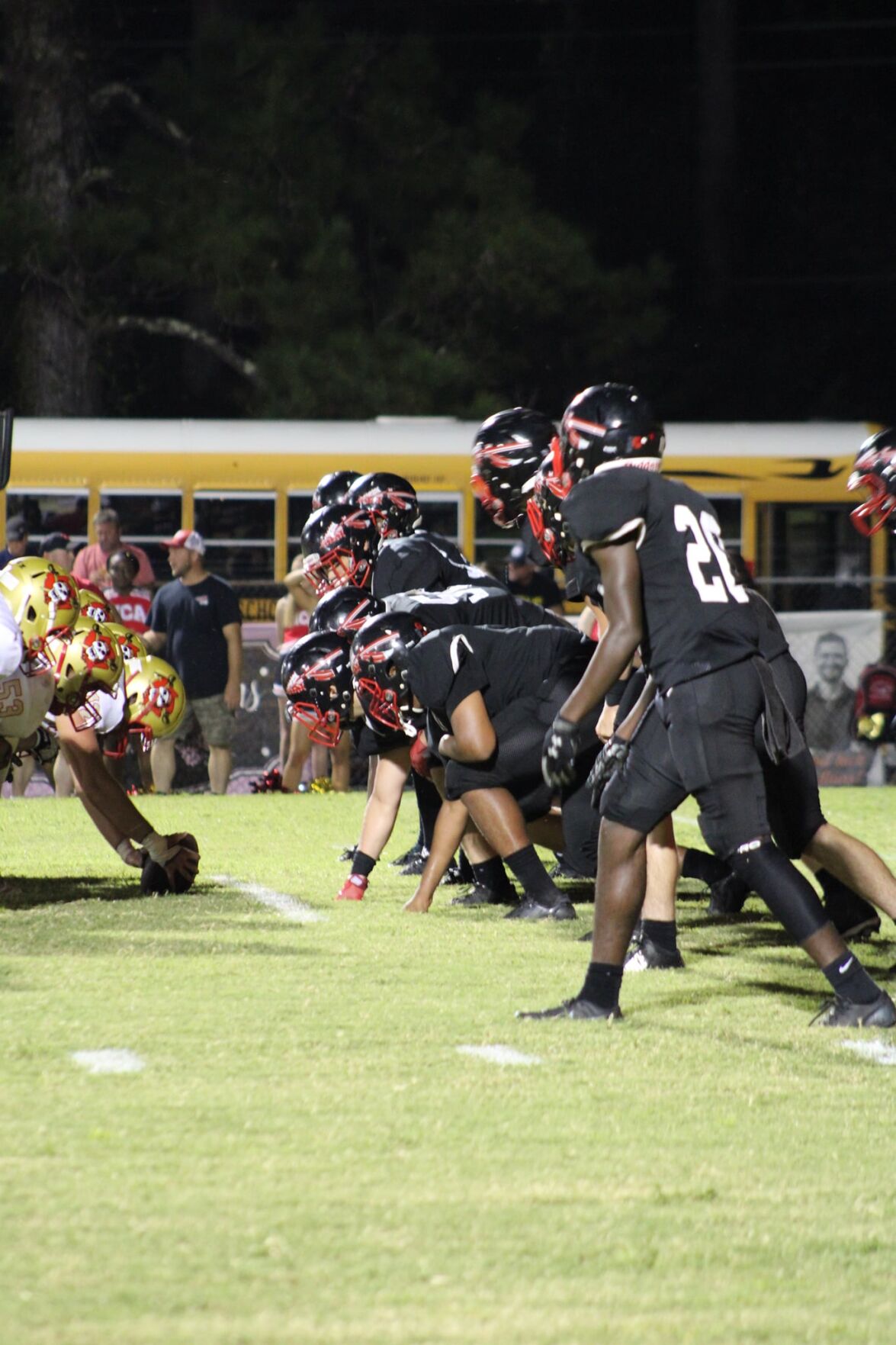 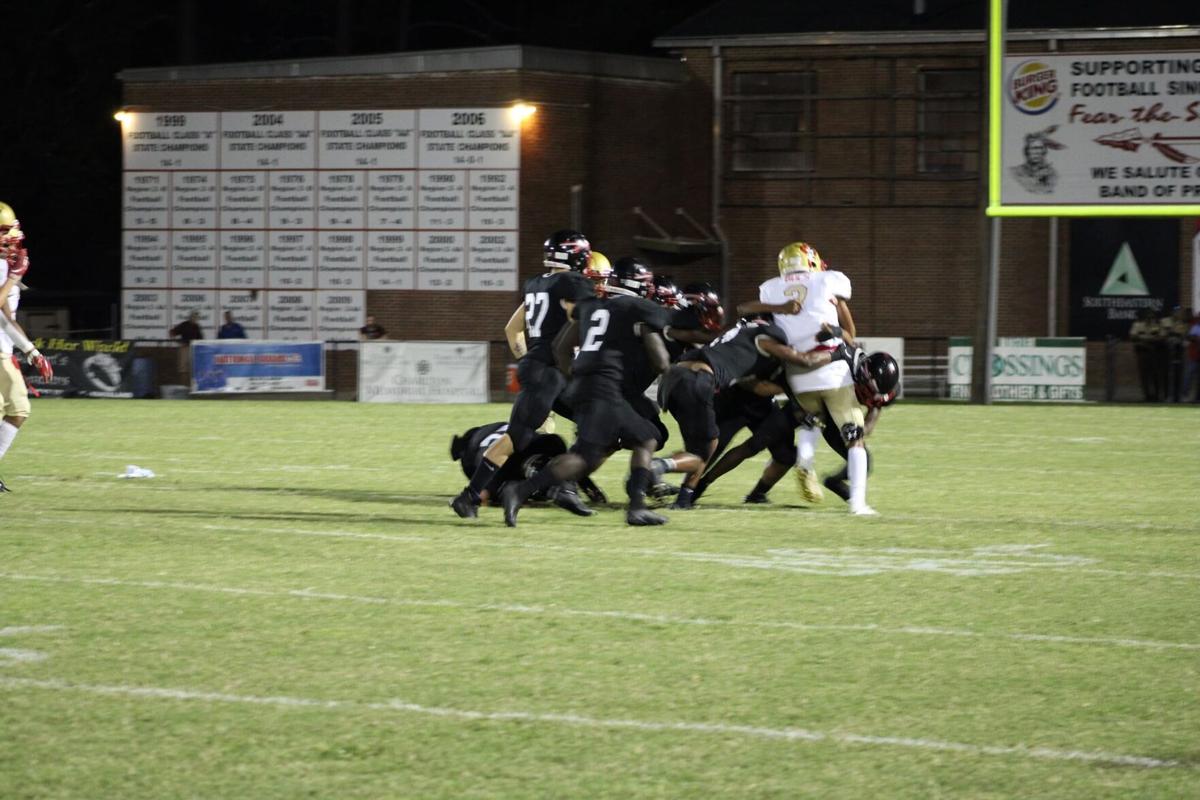 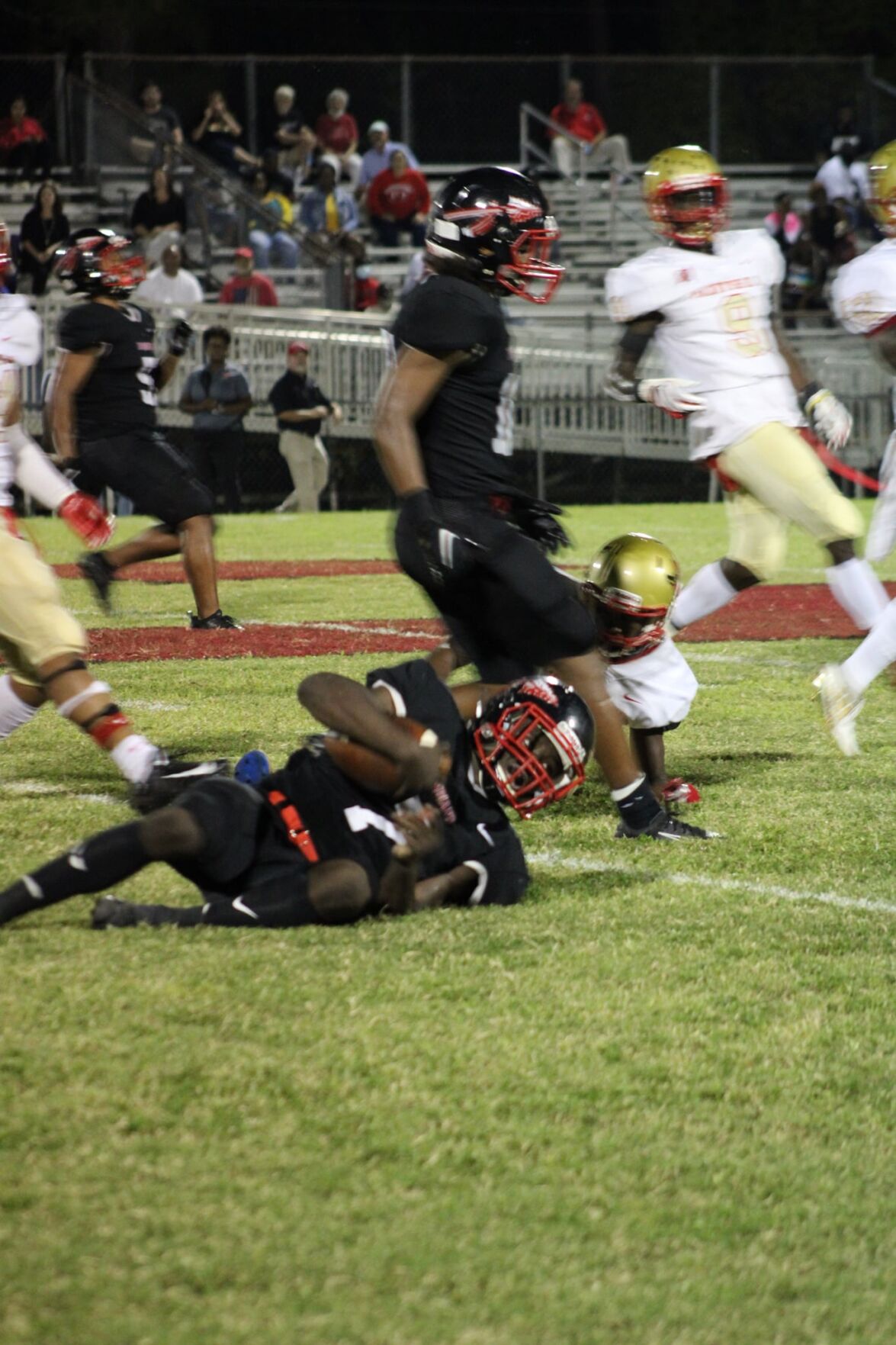 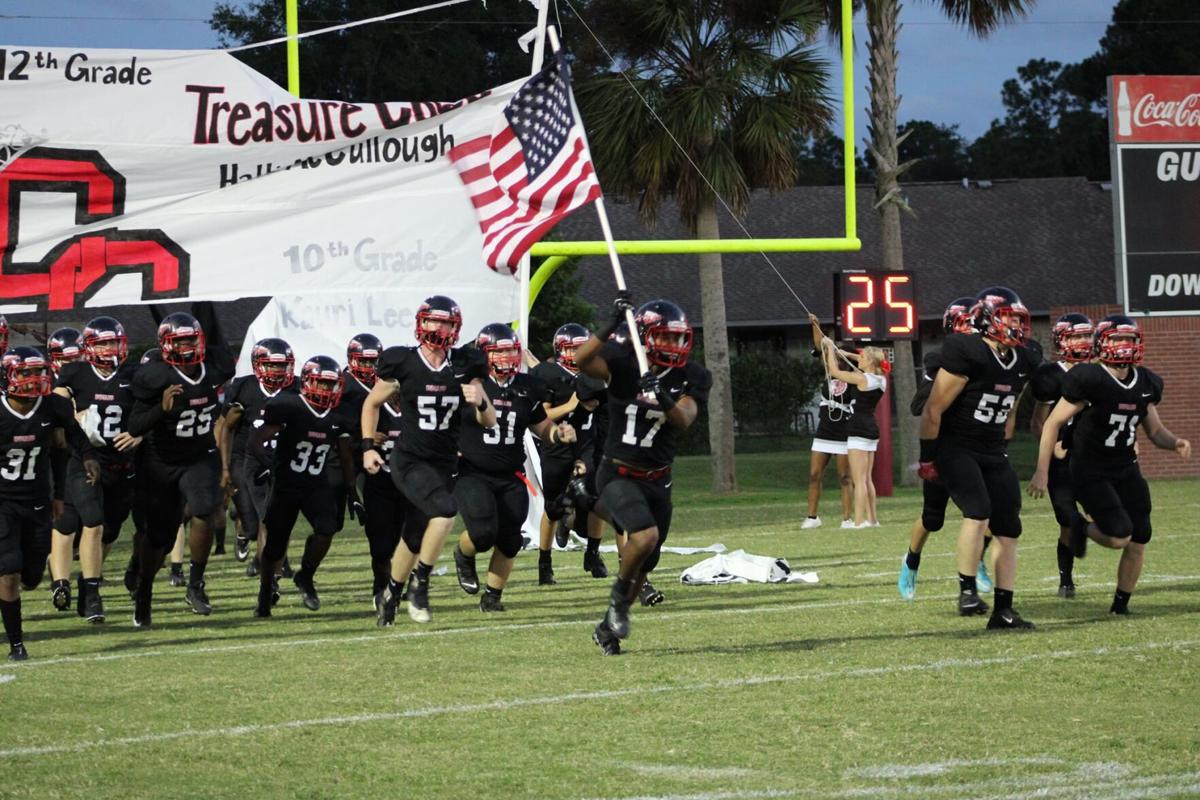 McIntosh County Academy used a strong time consuming rushing attack last Friday night to ruin the Homecoming affairs of the Charlton County Indians. McIntosh jumped out to an early lead and then withstood an Indian rally that fell short and hung on for a 29-21 win.

McIntosh took the opening kickoff and on the second play from scrimmage broke off a sixty five yard touchdown run to put the Indians behind for the first time all season. The PAT kick was good and the Buccaneers led 7-0 fifty three seconds into the game.

The Tribe couldn’t move the ball and punted back to McIntosh. Stating at their own forty four the Bucs only needed six rushing plays to find the end zone again scoring from six yards out. The extra point was good and the stunned Indians trailed, 14-0.

Charlton would pick up their initial first down on the following drie on a nineteen yard run by Tony Cobb but a penalty and a sack thwarted the drive.

The Indian defense held the Bucs forcing a punt and took over from  their own thirty. Cobb broke loose for twenty five yards on three carries and a personal foul on McIntosh pushed the ball to the Buc’s thirty. Emari Williams picked up nine yards on a jet sweep. A penalty pushed back the Indians to the twenty sixand after picking up just three more yards faced a fourth down from the twenty three. Cobb picked up the first down and more as he raced twenty yards down to the three. Cobb would finish the drive two plays later scoring from one yard out. Wyatt Crews kicked the PAT and the McIntosh lead was cut to 14-7 with 8:05 left in the half.

But McIntosh would answer right back after the kickoff needing just four plays to cover seventy yards. After picking up twenty yards rushing on the first three plays the McIntosh runner busted free for a fifty yard touchdown run. The Tribe jumped offsides on the PAT attempt and McIntosh opted to go for the two point conversion and were successful to increase the lead to 22-7 with 6:03 left in the half.

Charlton was unable to advance the ball and McIntosh drove down close but missed a forty two yard field goal as time expired in the half.

The Indians received the second half kickoff and Cobb returned it fifty two yards to the McIntosh forty five. Two Cobb runs picked up a first down but an Indian penalty set up a first and fifteen. But two straight passes from Jaylen King to Emari Williams covered twenty six yards down to the ten yard line. Three plays later the King to Williams connection would cover the final seven yards and with Crews’ PAT the Indians trailed 22-14 with 7:38 left in the third quarter.

Neither team threatened the remainder of the quarter and the Bucs took over possession at the start of the fourth quarter. McIntosh went on a twelve play drive that chewed up over eight minutes off the clock and scored on a thirty one yard run with 4:44 remaining. The PAT kick gave McIntosh a 29-14 lead.

Charlton took over and tossed four straight incomplete passes to give the ball back to McIntosh at the thirty five with 4:19 remaining. Things looked bleak for the Tribe as the Bucs drove down to the fifteen chewing up clock. But the Tribe would force a fumble and freshman safety Jamari Hamilton scooped up the loose ball and raced ninety yards to paydirt giving the Indians some hope. Crews kicked the PAT and with 2:22 left the Tribe trailed 29-21.

With no timeouts left the Indians had no choice but to attempt an onside kick. But McIntosh would fall on the loose ball and proceed to run out the clock to give Charlton their first loss of the year.

Cobb led the Indians on the ground with seventy four yards while Williams caught half of King’s eight completions for forty seven yards. The Bucs rushing attack picked up 436 yards on the ground as they only attempted two passes on the evening.

The Tribe will look to get back in the win column this Friday night when they travel to Chula to face Tiftarea Academy for the first time ever.