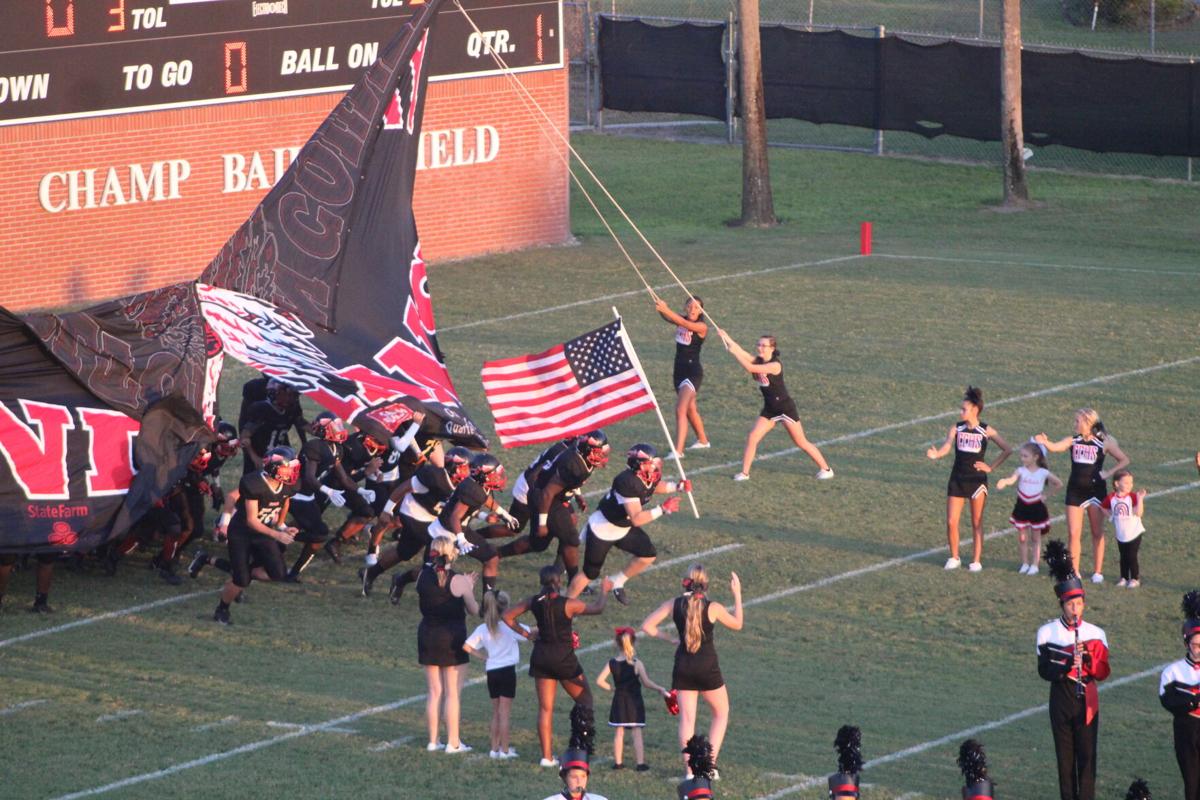 THE TRIBE TAKE THE FIELD AS RECREATION CHEERLEADERS GREET THEM. 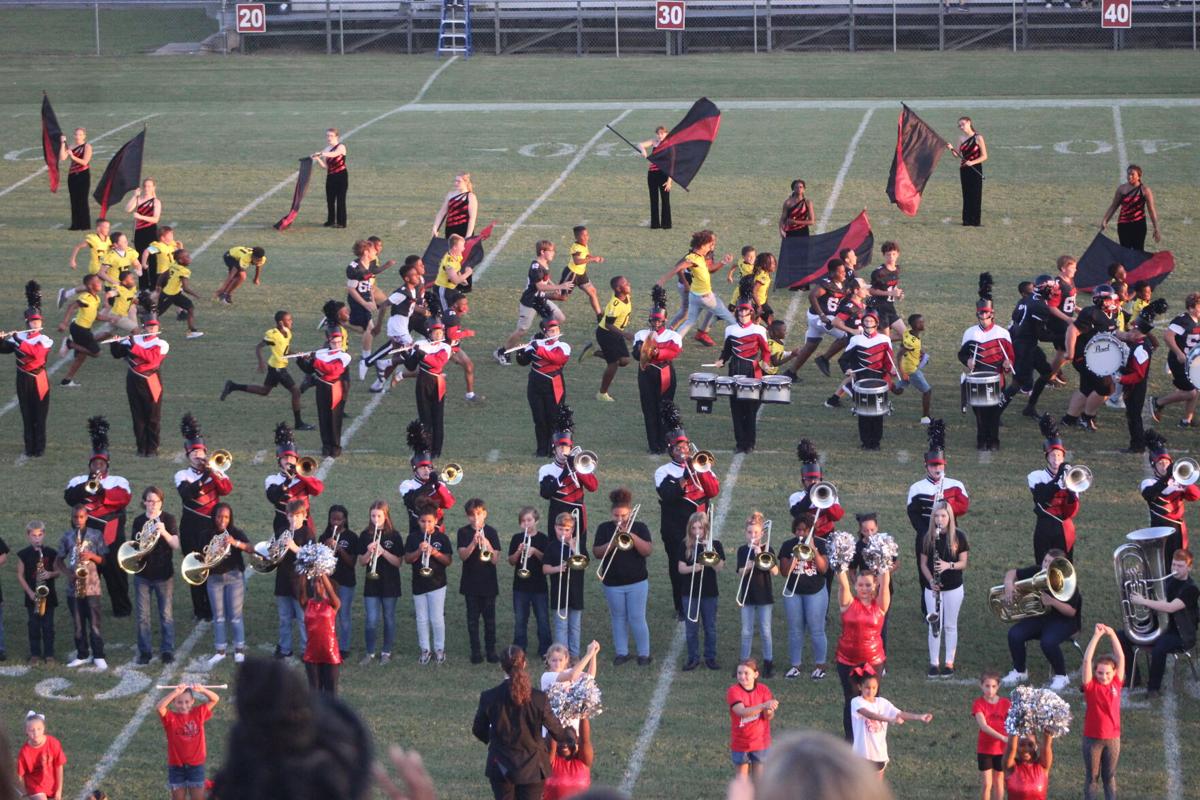 FUTURE INDIANS AND BAND OF PRIDE MEMBERS GET THE EVENING STARTED. 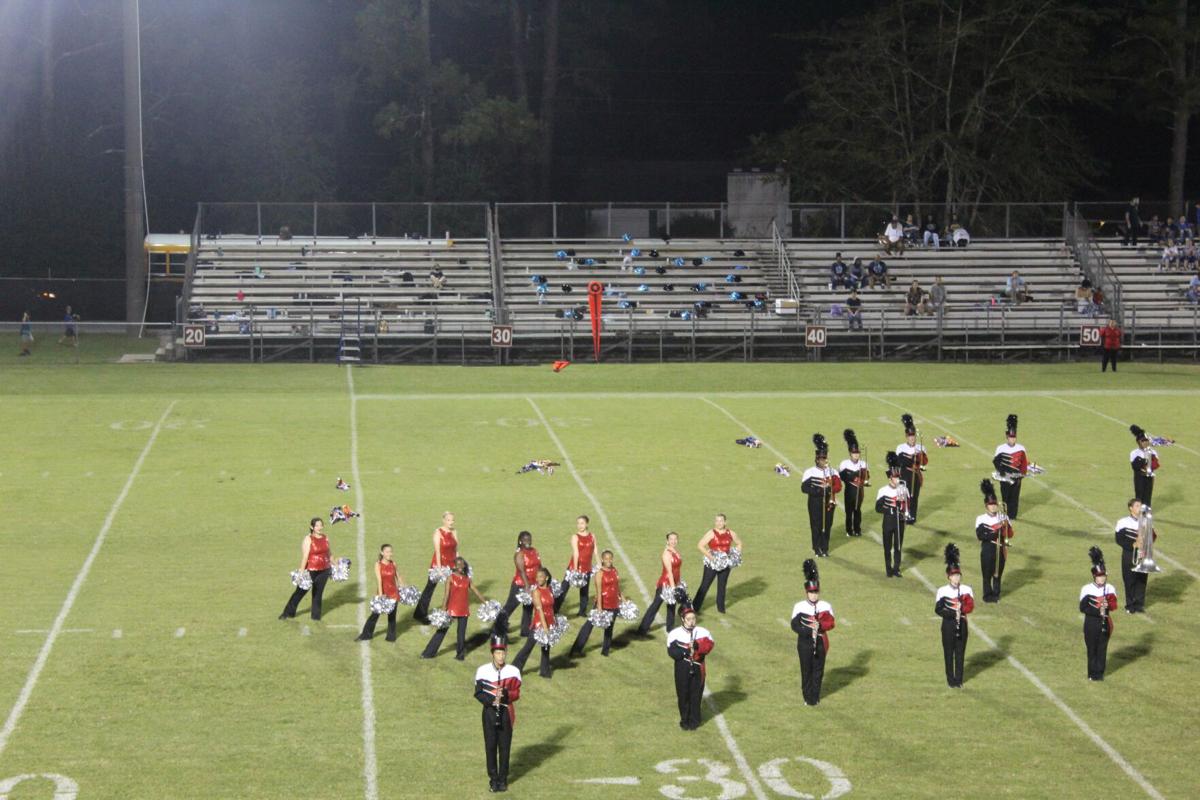 THE BAND OF PRIDE GETS THE CROWD GOING. 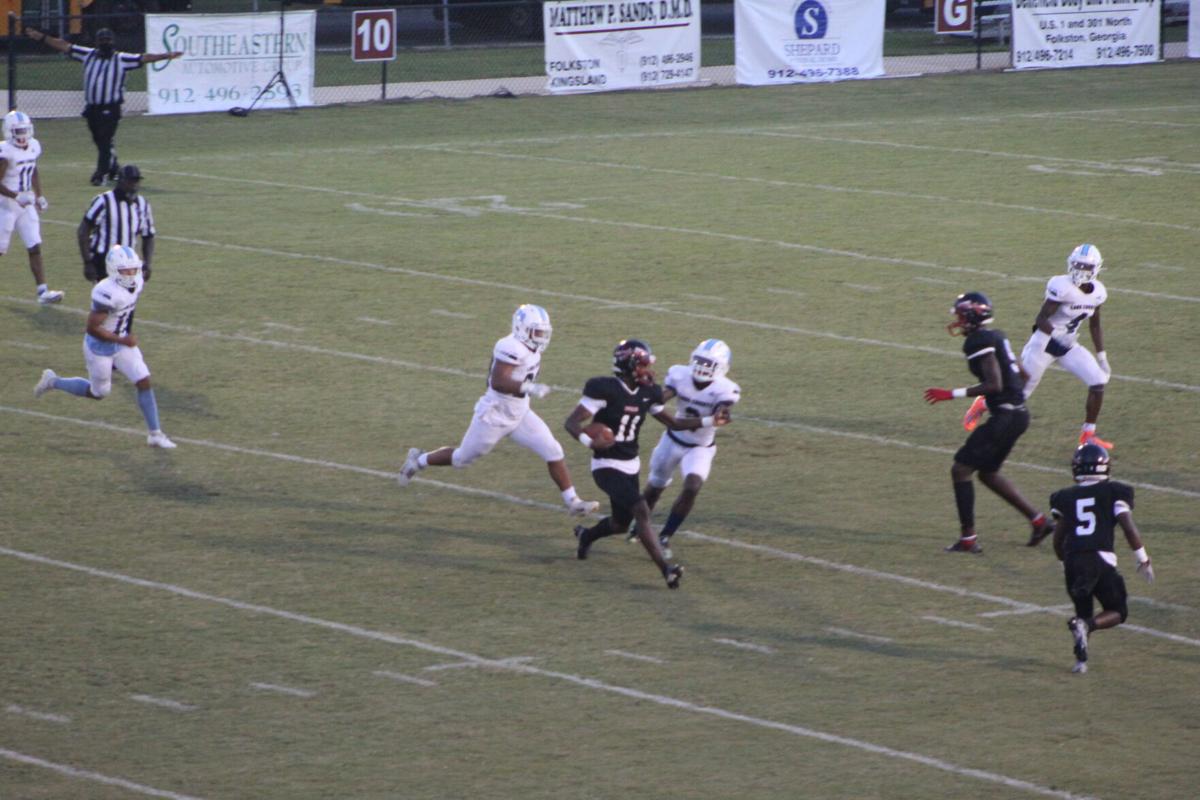 JAYLEN KING TAKES THE BALL DOWN THE FIELD. 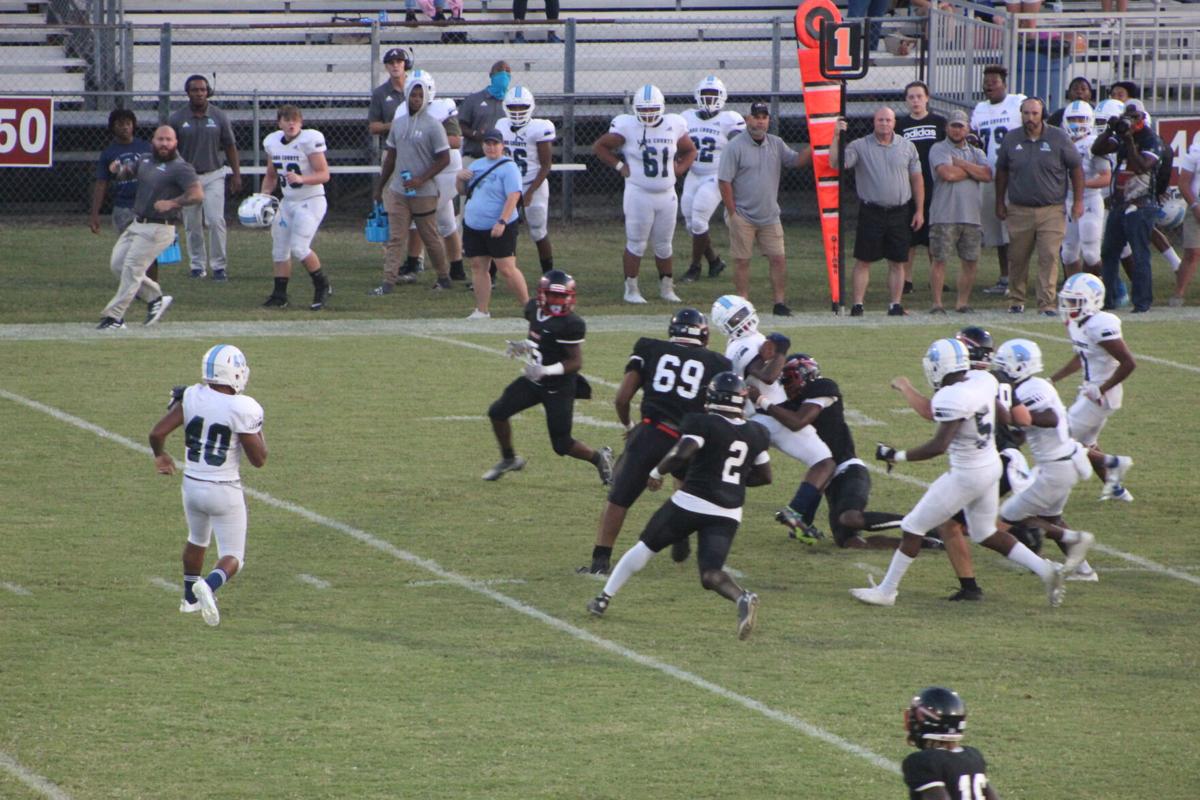 THE TEAM DID WORK ON DEFENSE TO KEEP THE SCORE IN ITS FAVOR.

THE TRIBE TAKE THE FIELD AS RECREATION CHEERLEADERS GREET THEM.

FUTURE INDIANS AND BAND OF PRIDE MEMBERS GET THE EVENING STARTED.

THE BAND OF PRIDE GETS THE CROWD GOING.

JAYLEN KING TAKES THE BALL DOWN THE FIELD.

THE TEAM DID WORK ON DEFENSE TO KEEP THE SCORE IN ITS FAVOR.

The Charlton County Indians were in high gear last Friday night in Folkston against Long County. In their home opener, the Tribe rolled up 389 yards of offense, while the defense held the Blue Tide to just 50 yards in the 40-0 win.

The Indians would waste no time getting started after fair catching the opening kickoff at the 30 yard line. Two runs by quarterback Jaylen King netted 17 yards and running back Jaylen Lilley followed with a ten-yard burst. After a penalty pushed the Tribe back five yards, King would connect with Najee Smith for an 18 yard gain. Lilley followed with two runs totaling 23 yards to set up a first and goal from the seven. King ran for three yards and on second down, found Smith open in the end zone for a four-yard scoring pass. The PAT kick failed, but with 8:22 left in the opening quarter the Tribe led 6-0.

Long would take the ball and pick up six yards and took an early gamble by going for it on fourth down from their own 44. The Indian defense stuffed the run and took over on downs.

On the first play from scrimmage, King hit Kyler Williams for a 24-yard gain, but a big hit caused a fumble that Long recovered and returned the ball across midfield to the 45. But the Indian defense was up to the task again, and on second down Long would fumble and Lilley recovered to get the ball back to the offense.

Runs by Jamari Hamilton and King pushed the ball picked up a first down, but a holding penalty would knock them back. But runs by Lilley and completions to Emari Williams and Kyler Williams pushed the ball down to the 15 yard line. King ran for four yards before Lilley capped off the drive with an 11-yard touchdown run. Lilley added the two point conversion and with 1:05 left in the first quarter the Tribe led, 14-0.

Lilley would continue his big night registering a sack to force a three and out on Long's next possession. The Indians would take over from their own 30. Runs by Lilley and King, along with receptions by both Emari and Kyler Williams, set the Tribe up at the 12 yard line. A holding penalty pushed the Tribe back, but a 14-yard pass to Kyler Williams set up a fourth and three from the five yard line. King would keep the ball and not only pick up the first down, but score the touchdown from five yards out. The PAT was blocked and with 5:56 left in the half, the Indian lead was up to 20-0.

On the ensuing kickoff, Long fielded the ball at the 30 and raced 70 yards to paydirt, but a block in the back negated the score and the Blue Tide took over from their own 39. The Tribe pushed Long backwards and they lined up to punt the ball back. A bad snap forced the punter to run and he was tackled at the 33, giving Charlton great field position.

The Indians lost four yards on three plays, but on fourth down, King hit Lilley on a screen pass for 29 yards down to the six yard line. Two plays later Lilley would find the end zone from six yards out. The run for two points failed, leaving the lead at 26-0 with 2:06 left in the half.

Long would open the second half by picking up one first down, but ended up having to punt with the Indians taking over from their own 35. Lilley ran twice for 40 yards before King hit Emari Williams for 15 yards down to the 20. Jamari Hamilton carried four straight times down to the four yard line before Lilley ended the drive with his third touchdown of the night from four yards away. Wyatt Crews kicked the PAT and the Indian lead grew to 33-0 at the 5:03 mark of the third quarter.

On the kickoff, Crews found a dead spot in the Long kickoff return team and Emari Williams fell on the loose ball at the 34 yard line. Passes to Najee Smith and Hamilton pushed the ball to the 19. Hamilton then ran several times down to the eight yard line before King ran it in from there. Crews' PAT was good and the Tribe led 40-0 with 1:48 left in third quarter.

Long would fumble on the kickoff and Nathan Hamlette fell on the loose ball for Charlton. But a penalty on the Indians pushed them back and they were forced to punt for the first time in the game.

Playing with a running clock in the fourth quarter, neither team threatened to score again as the Indians would improve to 2-0 on the season after the 40-0 win.

Defensively, Jay Harris led the Tribe with 7.5 tackles, while Gage Renfroe had 5.5 stops with Lilley adding five tackles to his night. Lilley, Emari Williams, and Nathan Hamlette all recovered fumbles for the Indians.

The Indians will be back on the road this Friday night when they take on McIntosh County Academy in Darien at 7:30.