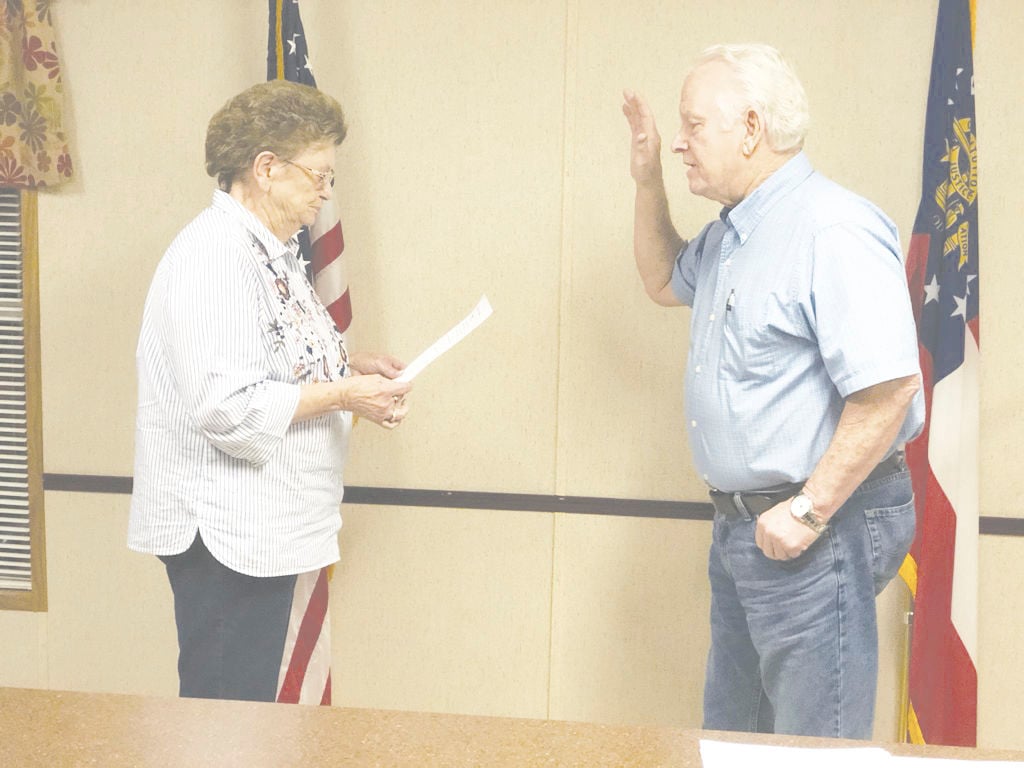 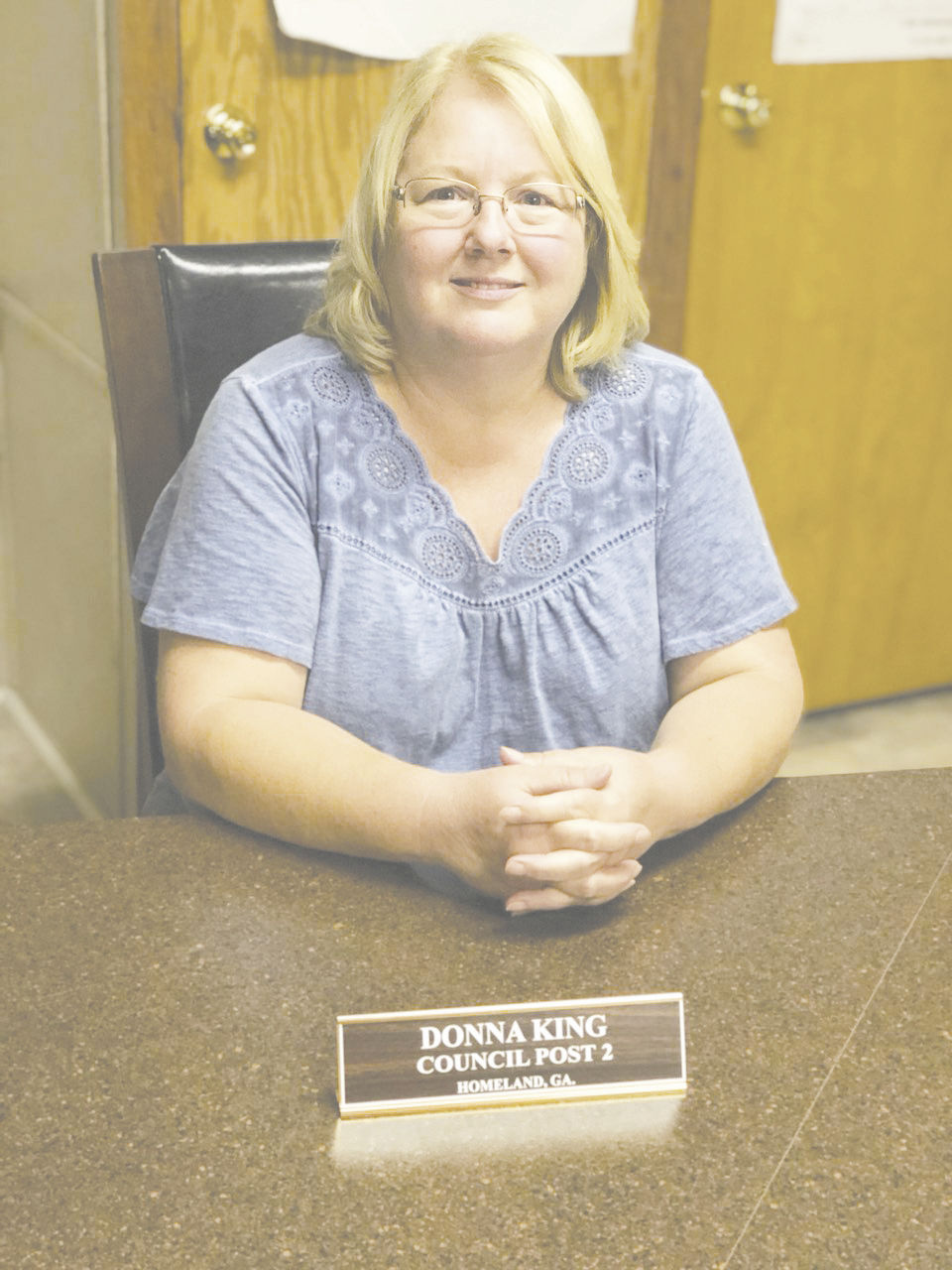 During the meeting, Councilwoman Donna King announced her resignation from Council Post two. King will be moving into the county limits and out of Homeland. Her resignation was effective immediately ending her career with Homeland after 18 years. She first worked for the city and then was elected to the council. Council members thanked her for her years of service and all of her hard work serving the City of Homeland.

Leroy “L.C.” Guinn was nominated and unanimously approved to serve in King’s place in Post 2. He was sworn in and will begin serving at the next meeting.

Next, the council heard from Councilman Kip Taylor. He shared the fire board met recently and discussed the new Fire Ban Ordinance.This ordinance will give the county authority to issue a burn ban. He also stated, the fire department has received five new volunteer applications.

The council heard from Public Works Superintendent Blair Nixon, who stated he and his team have recently emptied and sanitized the 150,000-gallon tank for the water tower. He also said the garbage truck is running well, they have sprayed for sand spurs at Waughtel Park in preparation for the Easter Egg Hunt, and the new picnic tables for the park are currently in process.

Councilman John Finsness alerted the council on the status of the dumpster currently located at City Hall. He said the dumpster was supposed to be picked up, but due to lack of staff at Advance Disposal, it has not been returned. He shared he feels the dumpster, while  being used regularly, is costing the city too much money (approximately $3,000.00 a month). He suggested the Clean Community Board schedule a meeting to discuss money-saving options. No date was set.

The city is still in the process of relocating a power pole from the middle of an alleyway. Mayor Ouida Johnson stated it was supposed to have already been moved and assured the council she will be checking in with Georgia Power again.

Mayor Johnson alerted the council the city’s portion of SPLOST funds were received in February, however the city will not receive the money until July. Councilman Richard Gwaltney shared he did not understand why there is a hold on the funds, recommended Mayor Johnson call Charlton County Administrator Hampton Raulerson to ask for a reason for the five-month delay. The mayor agreed.

The council discussed the payment received from the county to the city for the trash pick-up error and Councilwoman Lisa Nettles recommended the mayor look into the lack of property tax payments for the Robin Lane resident.

The council has been searching for a city attorney, but tabled the vote for a position as they have only received two applicants, one of whom has not submitted a resume’ and the other lives too great a distance away.

New locks have been purchased for the city hall building and will be installed by next week.

The vote was made unanimously to old the annual Easter egg Hunt Saturday, April 4 at Waughtel Park, beginning at 11:00 a.m.

Many citizens of Homeland were attendance and asked to address the council.

Jody Spurlock shared with the council there is too much speeding in her neighborhood in Nature Trails Estates. She shared there are 11 children under the age of 11, one of whom is deaf. She also stated there has been suspicious activity taking place in the area, but thanked Homeland Police Chief Brad Todd for his work handling one of the speeders. Councilman Gwaltney stated the council will speak with the Police Committee and keep her posted. They thanked her for following the correct paths to handle the situation. Citizen Holly Lloyd suggested the idea of speed bumps and was told the council will look into it.

Spurlock also shared there is an issue with the drainage in the Nature Trails Estates. She stated there is stagnant water compiling in the ditches, causing a foul odor.  Nixon stated he has been working with the South Georgia Regional Commission to include re-doing the culvert pipes. Spurlock, and citizens Steve and Casie Morgan, told council members the water pressure in the neighborhood is also declining. The council agreed to look into all matters.

Homeland resident Becky Dixon shared for several months there has been an unknown person breaking into her home, taking a shower, eating food, and leaving. She stated she has a 16-year-old granddaughter who is now afraid to be at the residence alone. Dixon also shared she is having issues with her water bill. She shared she has had higher bills in the past, which she was expecting, however she received a $435.00 water bill, yet the reader is not spinning and there are no leaks. Her bill the following month was only $39.00The council stated they would send someone out to investigate the issue as well as look closely at the next reading to get her bill under control.

The council also received a written complaint about a bulldog in the city. Chief Todd alerted the council the issues has become a civil matter.

The council is scheduled to meet again Thursday, April 9 at 7:00 p.m. at City Hall.