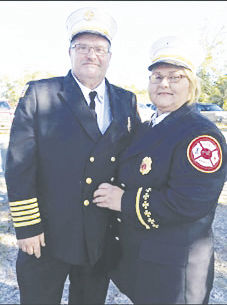 When Charlton County loses a citizen, the community feels that loss, but when Charlton loses a hero, it grieves as a whole. Kara Lynn Drury Lewis, or “Maw” as she was called, was a woman almost everyone knew and those who did loved her greatly.

“When I met her, it was an experience,” laughed Charlton County Fire and Rescue volunteer Brian Rauls, “You learned quick she was just herself.”

Kara Lynn is the wife of Fire Chief C.L. Lewis, mother to Lance (Sierra) Lewis and Ashley (Rev. Cliff) Adams, and grandmother to five, Mailey, Kalli, Kinsley, Noah, and Keegan. She is a sister, aunt, and cousin, and will always remain a member of many local families.

“So many called her Maw because she treated everyone like her own,” said Charlton County Paramedic Supervisor Sami Luffman, “You met her once and you became her family in that second.”

She had a giving heart and kind spirit that was recognized immediately by those in her presence.

“She’d give you the shirt off her back if she could,” said former Fire Chief David Kirton.

Lewis volunteered for Charlton County Fire and Rescue for more than 20 years. If there were an emergency, you could bet she was somewhere helping in anyway she could – day or night.

“If we needed a truck with water, she would leave her grandbabies in the middle of the night and you could hear her on the radio saying ‘504 – on my way.’ She would put her family on hold,” shared Rauls.

Lewis worked as the safety officer and took her role seriously, making sure responders were following safety guidelines and seeing they returned home to their families. She even worked as an unofficial dispatcher. If radios were down and volunteers didn’t hear the call, she would pick up her phone – no matter the time – and get responders out to the scene.

“Anything that needed to be done, you could count on her to do it,” said Kirton. “She was a super firefighter.”

Even in times of crisis, she had a warm smile and encouraging words for those in the field.

“There is always that one person you’re happy to see on scene and that was Kara Lynn,” said Luffman, “She never said anything negative.”

She acted as a mentor, teacher and even a mother to those who needed her.

“She wasn’t just a firefighter. She was a mother figure,” said Rauls, “She took everyone under wing. It didn’t matter if you were new or if you’d been there for 20 years, you could go to her for advice like you would your own mother.”

Lewis was the definition of southern hospitality, whether she was fighting a fire, having friends over, or preparing food for a group of hungry firefighters.

Kirton recalled, “If she wasn’t at the scene, she was usually somewhere cooking for us for when we got back.”

She enjoyed having her loved ones near her, especially for a fun time.

“I’ve been here a little over 16 years and I just can’t remember a time going to see her when she wasn’t welcoming,” said Luffman, “She always invited us to get-togethers.”

Her family was her pride and joy and she was scarcely seen without one of her loved ones. Even those who hadn’t seen her for a while knew her love for them never waivered.

“When you have that kind of closeness, you don’t have to talk every day or every week. But when you did, it felt like it was just yesterday,” shared Luffman.

Even in the hardest of times in one’s life, she would be there.

“In my time with CCFR, I’ve lost both of my parents. Both Kara Lynn and C.L. were there for me,” shared Rauls, “Everyone in that department and surrounding counties was there for me. We’re a dysfunctional family, but at the end of the day nothing could come between us.”

During her time serving the community, Lewis learned it was important to be straight forward, and compassionate.

“Life is short,” said Luffman, “she knew you had to take care of each other.”

In the good and bad, she was honest.

“She didn’t have a filter and not everyone understood that, but if she was wrong, she’d admit it,” stated Rauls, “She had a way of getting through all the ‘bull’ and get to the truth. The community truly lost a jewel.”

Lewis will be remembered for her giving heart, strong mind, and the love she had for her family and community.

As Kirton says, “She didn’t earn the name ‘Maw’ for nothing.”